This morning, as I played with Z in the living room, I happened to glance into the kitchen, and there on the table were a dozen roses and two gifts for me- one was a gift basket of rose-scented bath & body things, and the other was this: 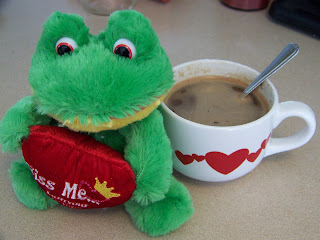 I let Z play with the frog a little, but I drank all the coffee. :)

The thing is- Hubby had to work at camp last night with the group until 11:30 pm. And of course, being the master plan-ahead-er that he is, he did not have a Valentine's gift for me yet. I really didn't expect one & it wasn't that big of a deal to me. Anyway, he decided he wanted me to have a nice surprise, so last night, with his lingering cold, in the middle of a tiring retreat, he headed to Wal-Mart (a 30-minute drive). I think I remember him crawling into bed around 1:45, maybe... but I guess that's love for you. :)

So...as far as how we spent our Valentine's Day? Well, we have about 150 teens at camp for a retreat this weekend. So Hubby spent about 3-4 hours driving the tractor in the snow so the teens could enjoy the Snake...and in between that and Z's naps, we spent our day in the kitchen.

Here's our family in the camp kitchen: 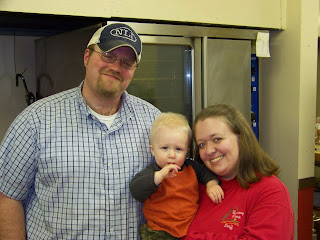 Here's Z checking out the syrup boxes under the pop machine counter: 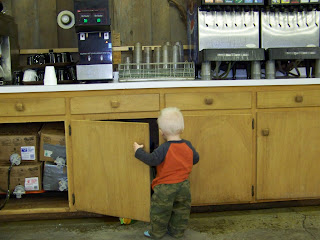 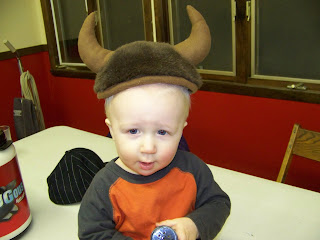 And here is my musical prodigy, playing the recorder (a Valentine's Day gift from my aunt & uncle). He loves to walk around the house toodling away on it. In case you were wondering, he can only play one note. And, no, it's not really that annoying. :) He also received a tambourine & several other instruments, none of which have driven me crazy as of yet. :) 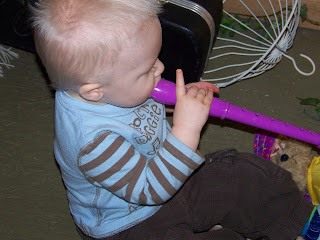 Did you all have a good Valentine's Day???