As usual, the kids have been hilarious lately!  Just thought I'd share! :)

I love hearing my kids pray! Natalie prays now, at bedtime mostly, and she loves to thank God for all the members of her family.  One day, when she was having a particularly hard time obeying, I asked her to pray & ask God to help her obey.  So she closes her eyes, folds her little hands, and in her sweet little two-year-old voice, says, "God...help...obey"  So sweet!!

Zachary and I have been doing our geography for school lately - we're working through the countries on the Operation World prayer calendar (link here).  It is a good lesson about geography along with a great reminder to pray for those in other countries around the world.  Each day we look at the facts about and the maps of a country or two, and then we pray for the needs listed for that country.  It has been a good opportunity to talk about different religions around the world, too.  One day, Zachary prayed, "God, please help the people in Bahrain to know you as their Savior, especially the Muslims." :)

Natalie says so many hilarious words now - broccoli is pronounced "bonky bonky" and weirdly enough, raw broccoli (with ranch) is one of the very FEW things my picky daughter will eat!  She also calls the walkie-talkies she and Zachary enjoy playing with "Hockey-hockeys". One day she hurt herself and kept asking for a "day-day" - turns out it's a bandaid!  She still mostly calls Zachary "Bubba", but she has a name for him now - it is something between "Goggy" and "Gacky". :)

Speaking of pronunciation, we got some fruit cocktail recently, and Zachary was calling it "fruit cottontail".  It cracked me up every time.

One day when Natalie was trying to tell Daddy something, I answered her.  She turned to me, put her hand out towards me, and said so seriously, "Daddy. Daddy."  I guess she wanted to be clear that she wasn't talking to me!

Joel to Zachary: "You have great ideas."  Zachary, matter-of-factly: "Yes, I do."

Davey has been growling a lot lately, and now when you growl at him, he will growl back.  And he has started babbling sometimes, especially when he's bored or tired, he goes, "Daydaydaydaydaydaydayday".  It's so funny. :)  Natalie likes to talk to him in a squeaky little 'baby talk' voice, which is so cute. :)

One night Joel asked Zachary to read a book to him, and Zachary declined by saying, "I don't want to waste my breath reading."  Where did that come from?

Natalie fake cries now, and it is hilarious.  One day she was being shy at MOPS and wasn't feeling great, so I brought her upstairs with me.  Every time she started to get a little loud, I would say, "Do you want to go downstairs to your class?" and she would say, "No! I sad. I cry."

One morning Z kissed Natalie on the cheek and she said, "Yucky, baby!"  He loves to give her hugs and kisses, and is very affectionate with her - which she does not always appreciate.  We have been having discussions lately about respecting her when she doesn't want to be hugged...

Natalie also likes to boss Davey around - she is quite the little mama.  Every time Davey has something that isn't a baby toy (even if it's fine for him), she goes, "Ohhhh, no, Davey. No wipes. Ohhhh, no." and takes it away!  She even tries to roll him over if he's fussing, and it does NOT help - we are working on that one. :)

One day when we were having a random conversation about shapes, Zachary said, "I think that's a parallelogram." Oh, really! :)

Natalie pauses as she walks out of the living room and says to me, "I leave. Be back. No cry." :)

Zachary shouts from the back of the van one day, "When the music is loud, I can hear the horns! It sounds like there are horns all over our car!!"

Zachary is hilarious when he tries to teach David things - one day there was one of those stinky brown ladybugs crawling on David and I said, "Wow, I'm glad he didn't eat it!"  Zachary said, "We don't eat bugs!"  When I explained that David didn't know that, Z said, "David, we don't eat bugs. There, now he knows it because I taught him."  LOL - if only it were that easy!  He was also spending time trying to teach him how to play with a toy that had buttons on it (one of those where you press the little buttons & switches and the doors pop open across the top with the animals inside...).  It was super cute. :)

Natalie says "Mommy? Are you?" or "Daddy? Are you?" for 'where are you' now!  She likes to say this after bedtime when she's supposed to be sleeping...

One morning Zachary came in to wake me up, and Joel was already up, so he jumped into the bed, laid his head on the pillow next to me and said, "Wanna talk with me?"  A few minutes later he wanted to get up and I said I was having a hard time getting out of bed.  Very matter-of-factly, he said, "Well, you take your head off the pillow like this, then throw the blanket off, then put your feet down and stand up."  Thanks for the advice!! :)

David knows his own name now - he looks all around when one of us says it, and one night he was eating & almost asleep when someone on TV said, "David!"  His head popped up and he looked at the TV, it was so amazing! :)

In other family news, we have decided that Zachary will be going to school at home this fall!!  I know, I've taught him preschool at home for 2 years now, but this is the first year he's old enough to go to Pre-K at school, so this is the first year we had to actually officially decide whether or not to send him.  We're researching curriculum now, and so far the one I am loving is called Five In A Row (FIAR).  A friend of mine uses it and loves it - does anyone else have any experience with it?  I love that it's literature-based, and I love that it's made up of unit studies & can be used with all ages of kids - I think by this fall, all 3 of the kids will enjoy being involved in the activities! (Well, Davey might be a little young to do much this fall, but maybe next spring at least). :)  From what I've heard, we will need to supplement with math & phonics, and I want to do something for Bible, too (possibly the FIAR Bible supplement? Has anyone used this?) so any curriculum recommendations along those lines would be welcomed, too! :)  I am excited to re-organize the schoolroom this summer, and get all organized and set up for the fall! Lots of great ideas on Pinterest...and so little time! :)  We only have 5 more weeks of school for the year, and one week of Easter activities while we get ready for vacation coming right up! :)
Posted by Carrie at 9:55 PM No comments: Links to this post

Our family has been very busy with all kinds of fun- like a grandparents visit, LOTS of hours playing out the GORGEOUS, 70 degree MARCH weather (what? Here in western NY we regularly schedule SNOW retreats in early March!!), and even a Mommy & Daddy getaway to Niagara Falls, Canada!!  Anyhow, we somehow managed to squeeze in a week of school about the letter T!

Posted by Carrie at 10:37 PM No comments: Links to this post

Well, we've finished up two more weeks of school - we studied letters R & S! It is hard to believe we only have 7 letters left for the year - plus a light Easter unit, and two separate weeks of vacation, so ten more weeks till school's out for the summer, but still - we're so close to the end!

So, we studied the letter R - again, I failed at getting pictures of our circle time & Bible time board, but our Fruit of the Week was patience, and our song was Gotta Wait from the Sovereign Grace To Be Like Jesus CD.  Our verse was Ephesians 4:2 - Be patient with each other and lovingly accept one another.  We talked about showing patience but we had kind of a crazy week and I didn't catch them displaying it to each other very often... :)

Next, we studied the letter S.  Our fruit of the week was kindness, and thankfully the kids did better at showing kindness to each other this week.  They ended up getting Twizzlers for showing extra kindness at least a couple of times. :)  Our song was You Show Me Kindness, and our verse was 2 Timothy 2:24 - A servant of the Lord must not quarrel. Instead, he must be kind to everyone.  What an awesome verse to use in discipline situations!  I will definitely be referring to it in the days and weeks to come - as anyone who has more than one child has surely experienced, we talk about being kind to your siblings A LOT! :) 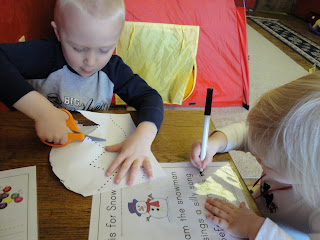 Well, so that's what we've been up to around here for school lately!  To see what everyone else is up to, check out Tot School and Preschool Corner!
Posted by Carrie at 9:36 PM 1 comment: Links to this post