We studied the letter D this week! Our theme was D is for Dinosaur, and we did circle time each day! 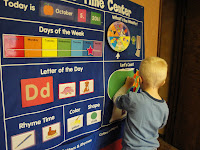 Our verse this week was about not taking God's name in vain, and our song was Honor the Name, about honoring God's name, and many of the different names for God. It is very catchy & I had it stuck in my head almost all week. :) It is from the Summer Celebration CD (website here). Our Bible story was a study on different names for God in the Hebrew language (such as Jehovah-Jireh which means God Provides, etc). Z is a little bit interested in languages right now, mostly Spanish, so this was interesting to him, I think, and it was very interesting to me. :)

We have been doing several sight words each week, from the Dolch list (printables here), and Z is excellent at them. I always thought I would use solely phonics to teach him to read but I printed out the sight word flashcards just as an extra activity at the beginning of last school year, and he just memorizes them at first sight, it is pretty amazing to me. :) Here is our sight word wall, with all the words we've reviewed in school so far. 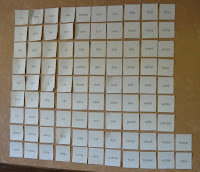 We made a dragon D this week. Here's Z with the beginning of his dragon, playing with him & making him talk. :) Sidenote- I love that he uses different voices to make his food/toys/anything talk now, it is so funny. :) 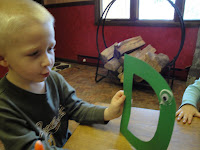 Natalie made a dragon D, too! Gluing on her dragon's spikes :)

Zachary gluing on his spikes. 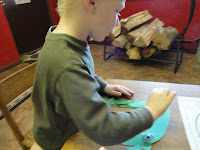 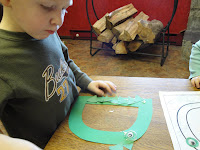 Our finished dragon D's! I got the idea here. 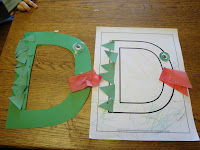 Zachary did a dot painting sheet (found here) and Natalie dot painted on the back of a Kumon coloring worksheet. 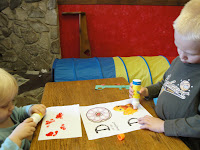 Then Natalie colored her worksheet. 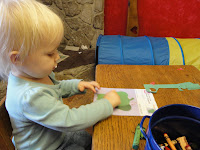 And Zachary colored his D page in his A-Z coloring book (from Priddy books). He also enjoys tracing the words in the book! 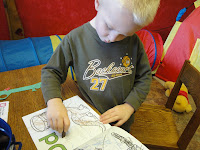 We used our Blend Ladder again this week, although he was not as interested as last week. 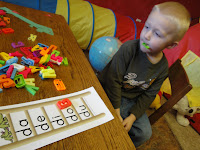 We played with playdough, it was a gorgeous day, so we played at the picnic table on the porch, and used some of the toys from our kitchen set to make pretend food - mostly cakes. :) 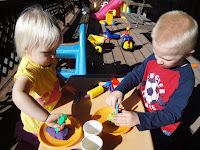 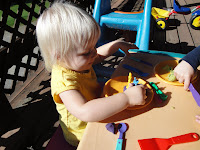 Natalie played with the lids to the containers, taking them off & putting them back on a lot. :) 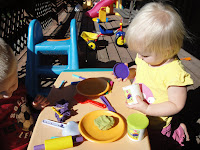 We got a PIANO this week!!! My husband heard about this free piano at a local rest home, and so his friend helped him go get it & bring it home! The best part was it was a complete surprise to me (I have wanted a piano for SUCH a long time!) - the kids & I came home from a quick trip to the camp playground, walked in to the schoolroom, and I said, 'Oh! There is a piano in the schoolroom!' I was so thrilled! :) The kids love banging on it, and I can't wait to teach Zachary to play. :)

We did some graphing this week, with dinosaurs and Cheerios. We lined up Cheerios in the boxes to count how many dinosaurs there were in each box, and we discussed what a graph is. This is from the LOTW curriculum, found here. We also did a lot of the same worksheets we've been doing, and I've included pictures in previous posts of his handwriting, etc. - this week I just didn't take pictures of all the worksheets. Handwriting did go better this week - I backed off & just gave instructions while doing something else & let him do it himself, and he was much less stressed & ended up doing a great job. :) 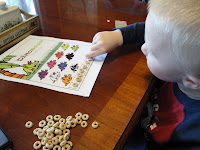 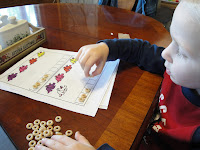 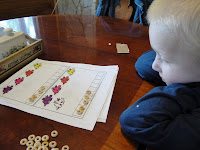 We are stuffing lots of fall fun into these last few weeks before winter, and we were able to go play in the little creek at camp this week, which both older kids loved! :)

Davey came along, too, and rode in the wrap & wore a little hat. :)

Nattie is messy! :) I think I put this in here so I remembered to say that we made homemade pudding pops this week (make instant pudding, let it set up & then stir in some whip topping, then spoon into a homemade popsicle mold & freeze - they're so yummy!) I let the kids help with the stirring & spooning and it was Sooooo messy! But they had fun. :) Then we ate the leftover pudding, and this was Nat's face. :) 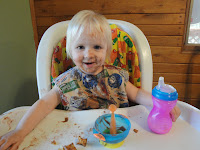 I'm linking this post to Tot School and Preschool Corner - head on over to those sites to see what everyone else did for school this week! :)
Posted by Carrie at 4:07 PM

What a busy week - looks like you had lots of fun together!

I'm very interested in how you did a Bible study on the Hebrew names for God. I know my 3 year old would not have understood that in the slightest! :)

Congrats on your new little guy - I somehow missed that since we stopped TotSchooling for the summer. He's adorable :)

I am glad handwriting went better. I sometimes find bringing out my camera causes some stress too. I have been much more mindful as our tot-time is not really to shape on a blog. but to spend time with our kids. Sometimes a hard thing to keep in mind for myself!

Wow Z knows a lot of sight words for being only three! Impressive! Davey's a cutie, I love the picture of him in the moby!

Pretty cool job you done here with your pre schoolers. Very impressive must say. Can i ask their age range and how many in your class?
Thanks,
Pre-K
Sarah in Pakistan

Thank you, Sarah. I teach my children at home, so there are really just two in my class - my son turned 4 in December, and my daughter turned 2 in December. :) My son is doing preschool work and my daughter works alongside him and does the same crafts and some tot activities geared just for her. :)