-Zachary is currently 30 months old-
We had a lot of fun with Tot School this week!

We have been doing No Time for Flashcards' Summer Reading Challenge! Here is the list of (well, some of) the books we read last week:

Z and I both have tractor and loader wheelie books and the Johnny Tractor book memorized, we read them over and over, SO many times!!! 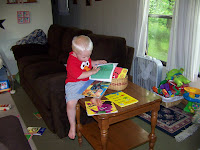 We drew with chalk, sorted his MegaBlocks by size (how many pegs on top of each block) and shape - rectangle vs. square, and we played with some dollar-store 'floam'. In case you've never given dollar store floam to a two-year-old, let me warn you that this is absolutely an OUTDOOR activity!!! 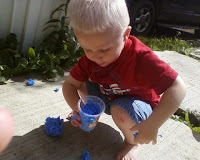 I forgot to include this activity that we did last week, so I'll put it here. Z is watching this video about Noah's Ark - it comes with a book, and it's an interactive storybook that reads the words of the book out loud - there is even an option where you can read it aloud with the TV & just press the button to hear the words you don't know - it's so neat. Obviously Z isn't to that point yet, but he enjoys watching the video (and there's a song and some trivia games on the DVD, too). It also comes with a programmable remote, but we don't have a DVD player, just my hubby's game system, so the remote doesn't work for us. :( 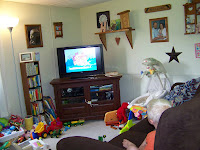 Z did some Kumon workbook pages this week - here he is drawing some rain over a snail with an umbrella. :) 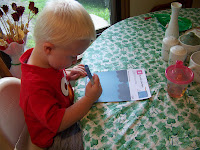 For our craft this week, we did dandelion painting! Last week, we made a field of dandelions - this week we used yellow dandelions to paint with instead of brushes! And we painted outside- why have I never thought of painting outside???? It worked really well! For supplies, you get to go dandelion hunting again, and pick several yellow dandelions this time. Then you need some paint, and I let Z pick two colors - he picked yellow and purple, and I put them on a plate. Just dip the dandelions in the paint and paint on a piece of paper! I thought it would be cool to do something similar with Queen Anne's Lace sometime, too - I'll let you know if we do that. :) 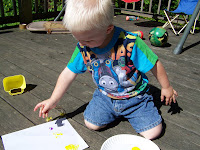 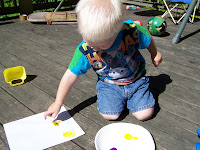 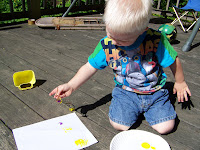 checking out the colors on the dandelion 'brush'. :) 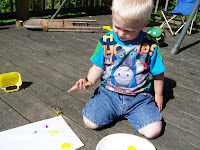 We did a color scavenger hunt this week - can't remember where I found this idea, but it's a great one - I just pulled out 3 pieces of construction paper, red, blue and green this time, and had Z find things that matched the colors - he did awesome with it! I suggested a few things at first and he put them where they belonged, then he got up on his own and grabbed the red tractor wheelie book, and put it on the red paper! He picked up the green & blue frog teether, too, so we put it half on green and half on blue and discussed why we did that. He had a lot of fun with this, and we will definitely do it again!!! 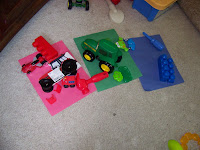 We also discovered Z's new favorite website this week - starfall.com! I have had this on my list to try for a while, but just hadn't checked it out - but it is great. It really helps with phonics, and they even have a whole preschool/kindergarten curriculum available that teaches kids to read through phonics. The games and activities are fun and really educational. They have activities that a newly 2-year-old would enjoy, and things that even school-age readers would enjoy! If you have a pre-reader, I would definitely check it out. We have been working on phonics for a really long time, but I think this site is really helping Zachary 'get' the concept - as we were walking to camp this morning, he saw a pipe, and was saying, "Pipe, pipe, pipe, puh, puh, puh, Pipe! P says puh - Puh puh Pipe!" I was super excited. :)

Just for fun - Z in a box. :) Actually, I really want to make a 'Let's Go-Kart' - if any of your kids watch Sprout on Saturday & Sunday mornings, you know what I'm talking about - but I was trying to see if this box would be a comfy car - as you can see, it wouldn't. But it's cute anyway. :) Also, our toys were all piled everywhere because of an issue with our carpet - it got wet & we had to replace it - but our new carpet is really nice and soft! :) 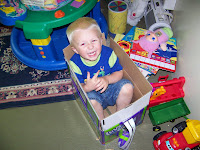 We had a picnic at a local park this week, the one with the big curly slide, which Z loves. :) It was fun. Natalie swung in a swing, and I got this cute picture of her (notice Z on the left going high!) 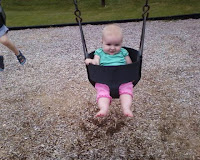 So of course I had to take a picture of Z swinging, too. :) 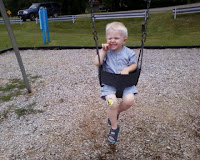 My tiny tot is almost 6 months old - couldn't somebody please stop time??? Waaaaa. Ahem. Excuse me, I'm back under control now. Here's my Natalie sitting in her highchair, with her new sippy cup. She likes to chew on it, and doesn't do much else with it, but it's cute to see her with it.

She is eating her rice cereal and some oatmeal baby cereal quite well now, and she had her first taste of sweet potatoes this morning. Though she was unusually fussy today, which could be due to teething or maybe the sweet potatoes upset her stomach, so I may hold off on those and switch to something milder like squash or avocado. Any recommendations?

And here she is playing on the floor, all smiles. She loves to kick, and was rather excited that she positioned herself to kick this bucket of blocks - she was playing with the handle with her feet. :)

For some reason I have a hard time with comments - so I'm trying this again, we'll see if Blogger lets me comment!
I love reading about all your "tot school" adventures - sounds like a lot of fun times.
Hopefully we'll see you sometime this summer (since we're in the neighborhood a lot lately~!)

WOW- you have like 70 blog posts in this one post! LOVE the idea of the color scavenger hunt and painting with dandelions. Excellent toddler activities! Have you ever submitted to Childhood 101's linkup called "We Play"? Some of your ideas would be perfect!

What a great idea!!! I haven't had a painting day with the girls in a while. I should do that.