Once again, it has been two weeks since I've posted Tot School! This past week was somewhat crazy, with trying to get into a 'camp routine', and being involved in some unexpected ministry myself! So I never got Tot School posted. So here are a million pictures of the stuff we've been up to! As I said, we've been eating meals at camp. Here's Z enjoying a peanut-butter-chocolate-graham-cracker-sandwich for dessert: (no, we don't make him clean his plate!) :) 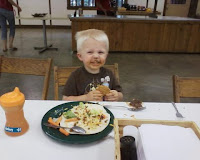 Here he is, messy again - trying his first s'more (made in the microwave). :) 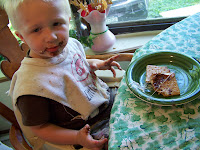 He cleaned up by playing with soapy water in the sink while (and after) I washed dishes this week. 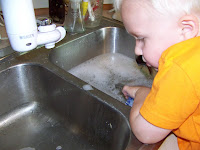 He loves to watch Sesame Street and Barney, and often repeats songs he learns from them. Here he is dancing with Barney. :) 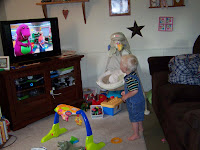 His aunt sent him this 'Light-a-queen' dry-erase board, combining two of his current loves, so he's enjoyed drawing on that. 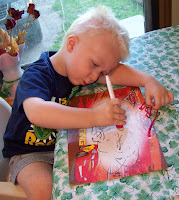 We played with Z's Flip Along Fun book this week - I don't think I've posted about this - but I won it in a giveaway a couple of months ago! It is such a fun learning activity!

Each page has different animals on it, doing a different activity, and you make a story with the animals you choose - also, you add the animals to make the right number, and learn about math while having fun! For now, we usually play 'match the animals' - we find a page we like on the right, and then look for the animals that make up that picture, then read the story. :) It is a rather ingenious book, I would recommend it for teaching pre-math and early addition! 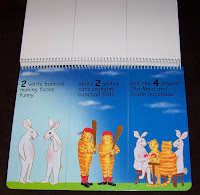 As always, Z loves to play with his Melissa and Doug underwater animals puzzle:

One morning, we had a 'bike wash' on the porch. He enjoyed washing his bike/trike with a wet rag and a bucket of soapy water. And, yes, he's wearing a pajama shirt. Every day he asks to wear his favorite Thomas the Train pajama shirt 'around da house'. So this one day I let him. 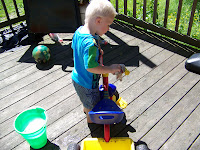 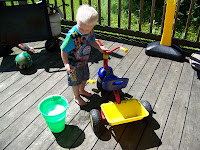 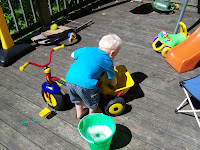 Z practiced cutting this week - so far, he uses both hands to cut with his little scissors, but he occasionally tries to use just one hand. He helped me cut some coupons off of a pop box...

and then I let him go to town on this Oriental Trading catalog, he had fun with that for about ten minutes - a nice, quiet activity!

We counted along with some goldfish with Zachary's Goldfish counting book. (Um, except we only had the goldfish's cheaper cousins, the whales, so they had to do. They worked fine.) :) 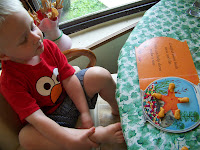 We did some painting, on the porch. 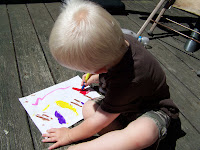 Z's favorite part was rinsing his brush out and watching the rinse water change colors. :)

We made a robot - you can find the instructions here - he is cut out of a cereal box, wrapped in foil, then we glued on wiggly eyes & taped on the arms & antennae. Also, Z colored on the foil with markers, but it didn't work well - I would let him use Sharpies if we did this craft again. With close supervision and no clothes on. :)

As part of the summer staff, we all got these cool glasses from a friend - well, Z broke his, but Natalie won't wear hers, right? So here we are, showing them off. :)

I SO love watching my little ones interact - it is just SO fun!!! Here is Zachary swimming his new fish bank from his aunt in front of Natalie. She is raptly watching him, as usual. Also, her totally adorable headband was MADE by her aunt for her - SO cute!!! :) 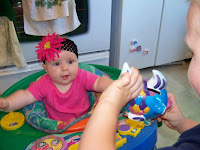 And here is Zachary tickling his sister! :) Awwwwwwww.... :) She loves this, too, obviously! 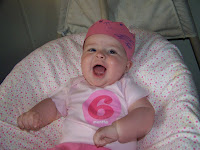 She is a very happy girl. She rolled all the way over here by Zachary's tools, and she is thrilled with herself! 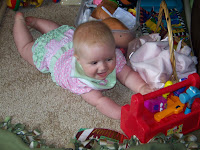 She also went 'swimming' (dipped her feet in) the pond this week, which gave Mommy an excuse to take this picture of my little chunker in her swimsuit. And she totally hated the cold pond water.

And here's one last picture of my happy little muffin!!! Such a cutie! :)

I found your blog through "Tot School" & I am so glad I did! Your family is just precious & I love how your blog seeks to bring glory to God with every word spoken!
Blessings,
Jessica

Oh my goodness! Is she ever growing fast! It is amazing how they loose that 'baby look'

He looks like he's had a very eventful time. I find it to be a challenge doing one thing in the day to give Jacob a change of scenery, whether it be a craft, walk to the park or baking with me in the kitchen. Some great ideas!