We had a full, busy week of Tot School this week! Besides having nice weather, and being able to get out a few days, we also did all kinds of indoor learning activities! First of all, I made this muffin tin letter matching game: I used paper muffin cups, and wrote a lowercase letter of the alphabet in each one: (I made letter a-z and numbers 0-9, which takes up 3 muffin pans exactly). :) 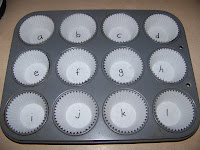 Then we used the uppercase letters from Z's small foam alphabet puzzle, and tossed them into the matching muffin cup. 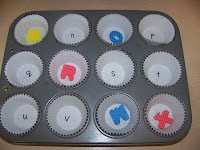 He enjoyed this, and we'll definitely do it again, but I think having all three muffin pans out there was too much, and a little overwhelming, so I'll probably put less of them out at a time next time, maybe one muffin pan, so 12 letters/numbers, would be better. 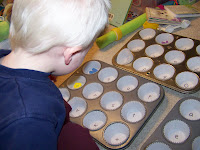 We started a new discipline tool this week as well. I got this idea from Lisa Whelchel's book Creative Correction, which I haven't finished yet, but I am really enjoying, especially the Toddler Tips - so useful, and SO creative! These are our new 'happy' and 'sad' jars - there are 16 blocks total in there, starting with half in each jar - and when Z does something that makes God happy (obeying), we put a block into the happy jar (from the sad jar). When Z does something that makes God sad (disobeying, not listening), we put a block back into the sad jar. When the happy jar is full, he gets a treat. So far, after about ten days of using this, we are two blocks away from a treat. :) But many times he chooses to obey because of the threat of a block going to the sad jar, so that is very nice. :) Really nice for when I'm nursing Natalie & I can't discipline him any other way, too. Also, I should note that Lisa Whelchel recommends using marbles in the jars, but since Z is so young, I am using something bigger so he gets a reward faster, and then we'll graduate to marbles later. :) 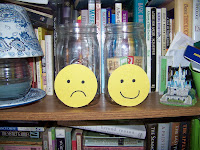 One day, I felt SO bad, because I told Z that we could go outside, then I got a phone call, and had to do something else, and by the time we got our shoes on and stepped outside, it started raining. Right then. So I let him dig in some beans with his sand toys instead of in the yard. :) 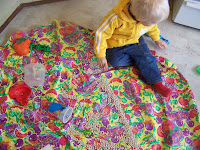 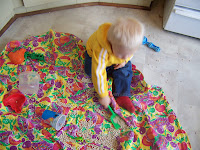 We did a couple of Easter crafts this week. First of all, we made a Peek-a-Boo egg with a little 'chick' inside - though Z wasn't overly impressed with my chick, and often calls it a worm. Hat tip to No Time for Flashcards for this idea. First off, we colored a white egg made of construction paper with markers. 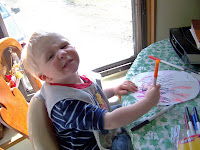 Then we used glue to stick on several dots of different -colored paper. I cut all the dots myself, so they're rather uneven, but he didn't mind. He loves to use glue. :) 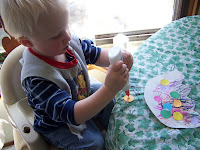 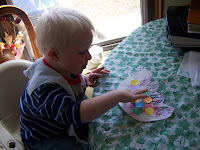 Here is the finished product: (What's your verdict, chick or worm???) :) 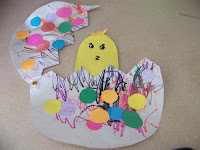 Here he is enjoying it - I forgot to say that we cut the egg in half (before we glued the dots on), and then added a brad so it would open & close. :) 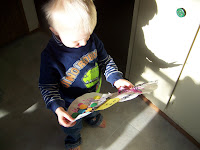 Here we are, all bright-eyed and ready to do another fun Easter craft. Yarn eggs. We have our balloons, and our string, and glue/water mixture. 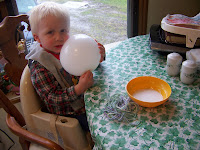 And this craft was an enormous fail. It didn't work great for us, but beyond that, I was getting frustrated, and Z wasn't really able to help, and the whole thing kept falling off of the balloon, and bleah. I would not do this again, unless I did it on my own or with really small eggs or something. 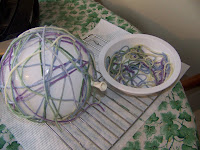 Here is how our egg turned out: 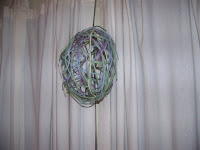 And here is how the string in the bowl turned out - one side was flat and I thought it looked dumb, so I just threw it away. 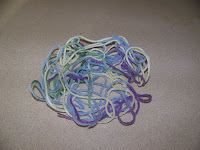 Here is Z playing with cars on his cool car mat - these actually used to be my sheets when I was a little girl, how fun is that? My mom made a leftover sheet into this play mat for Z for his birthday or Christmas last year. :) He loves it. 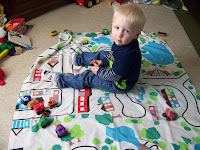 And Z's favorite book of the week: "Chancy Meatballs" he calls it. :) He loves the part where Henry has a pancake on his head, and then they eat them all up. And there is a page where a girl is making an 'icky' face, and he loves that part, too. 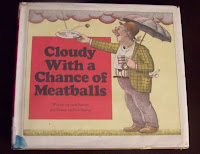 We also played with our color-matching clothespin game this week, and I was surprised because Z was able to open the clothespins, and match them correctly to the right color of smiley face! It is amazing how fast he is growing and learning!

Here is a fun picture from the week - Z playing with Easter eggs. :) 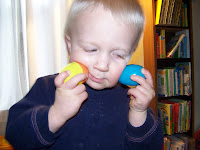 And he asked me to take a picture of this ladybug. So I did. :)

I cant believe how "crafty" you are! Lucky Z, I bet he has so much fun :o) I have that Creative Correction book, I just havnt read very much of it... Sounds like she has some good ideas. My second we need some creative ideas for.

Oh my goodness- i love the muffin tin idea AND the happy/sad jars! Awesome ideas! Thank you for sharing these!

Awww, your home is so fun! I have seen those yarn eggs in magazines and always thought about giving them a try. (I think I am glad I didn't! I was afraid something like that might happen!) I love the little chick craft - so cute! And the muffin tin game was a great idea! That idea could be used for a ton of things! The happy/sad jars is a cute idea. I am glad it is working for you!!