This week, the weather was gorgeous outside. Though we still had about three feet of snow on the ground, the snow on the roads is melting off, and they are getting quite muddy. So we spent most of our typical 'tot school' time playing outside and enjoying the gorgeous sunshine and the MUD. I never ever thought I would miss mud, especially since we have so much of it here, but the first day that there was mud in the driveway instead of snow and ice, it really made me smile. Z was not smiling today, however, when his shoe came off in some sticky mud & he stepped in it and got his sock all muddy. :) We'll all survive, though. :)

We did manage to do a few tot school activities in our spare time- Z is still working on learning his lowercase letters, so we used his letter blocks to connect the large and small letters. We also used some magnetic numbers to review those, and he put a 1 and a 0 together to make a 10 on his own - I was so proud! I have discovered that he now understands counting up to 3 objects, too, so that is exciting! :) You know how sometimes your child just doesn't seem to be grasping a concept, and you are trying and trying to teach it, and then you relax & stop worrying about it, and one day you discover that he's finally getting it? Yeah, that's pretty cool. :)

We used some little pom-poms from Walmart to practice sorting colors this week - I put them in different sections of a veggie tray I had, and he was supposed to sort them by color. 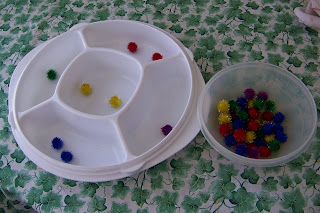 He got the concept (we haven't really sorted before, so I wasn't sure if he would understand), but wasn't too interested in keeping at it. He had more fun squeezing the pom-poms, and dumping them back and forth between the bowl and the veggie tray. When Daddy came home that afternoon, and asked him what he did that day, he said, "We played with pom-poms", so I know he had a good time at least. :) He was supposed to be working on small motor skills by using a spoon to dump them back and forth, but he mostly used his hands. (I've seen ideas where people use little plastic tongs for this, too, but I don't have any - sad!) 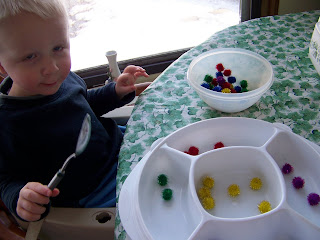 Later in the week, we were going to have a free paint session, but I decided to get out the foam stamps we got from Ollie's and see if he enjoyed that. He did, since they're bugs, but just fyi, finger paint doesn't work overly well for stamping. :( 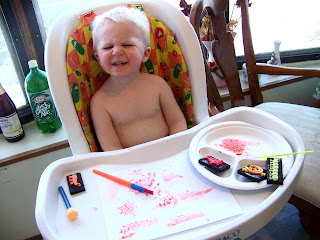 Stamping a bug on the paper. :) 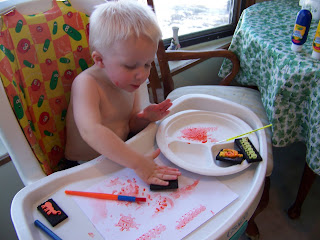 Lastly, we got out our alphabet activity wipe off book, and Z LOVED it. He used markers for the first time this week (for a birthday card for Daddy, shhh, don't tell, Daddy's birthday is tomorrow), and so he is pretty enamored with markers now. He REALLY loved drawing on the pages, coloring on the pictures and letters, and tracing his hands, and then using a napkin to wipe the pages off and start again. I thought I was going to have a full-blown tantrum on my hands when it was time to put it away! This is going to be at least a weekly activity, I can see that already. :) 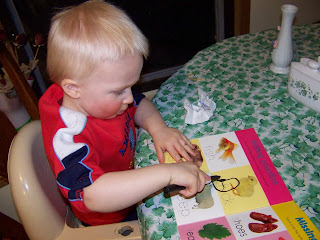 Z is just so sweet with Natalie - most of the time. :) He imitates everything I say to her, like, "Hey, fweetie...Whatsa matter, girlie?...ooh, tell me more, baby Natalie". It is so cute - I love watching them interact! :) I love this picture of them together! :) 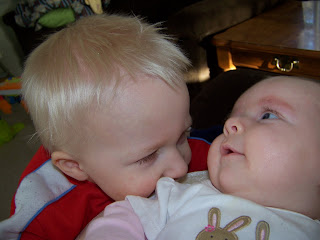 Wow, you do a really good job of working with him! Im very impressed, and a bit ashamed of myself :oS Cute pictures!

Awww, how cute he is with this little sister :)