We've been having a lot of fun with tot school lately! Going outside is a nice bonus, so we've been doing that a lot - I took both kids out for a few walks this week, which was really fun. We also found time to play inside some, too! :)

We'll start off with a great set of lacing cards that I found at a Mr. Salvage discount store last fall - we play with these a lot, and Z loves them, and I think they're really neat. The cards are made of thick cardboard, and they punch out of their surroundings like a puzzle, so you can match them up. Of course, you can lace with them, though Z hasn't gotten the hang of lacing yet, or at least he doesn't stick with it for any length of time. The cards also have the words for the animals on them, so you can read the words together.

Here is Z playing with the cards: 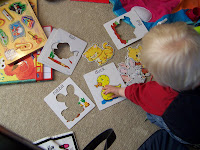 And here he is playing with the animals - this week, he just wanted to make the animal noises & then we matched them with their cards at the end, but no lacing. :(

We drew on black construction paper with chalk this week, and Z thought this was really fun. He kept telling me that we used the chalk outside (last fall!) - I am amazed at the things he remembers!!! 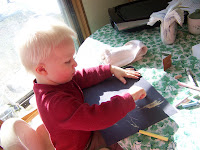 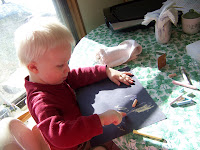 Here is some of what we drew: 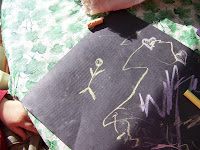 We did an Easter craft this week - we made Jesus' cross, and during this gluing craft (Z loves glue), I was able to talk to him about Jesus dying on the cross. First, we used brown chalk to draw dark clouds in the sky, and we talked about why it was a sad day when Jesus died. Then we drew green grass on the hill, and I talked about Jesus carrying his cross up the hill and how it hurt Him. Then we glued the crosses on, and I talked about Jesus dying on the cross and how much it must have hurt. Then we wrote Jesus' name on His cross. And he listened intently the whole time. It was so cool to get to share these things with my son! 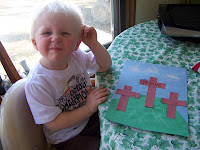 I didn't know if he really got it at all, because when we were done, I asked him if it hurt Jesus to die on the cross, and he said no. But then a couple of days later, he was singing a song while playing his little-boy-sized guitar, and he sang, "Jesus....cryyyyy...", so when he finished I asked him what he was singing about, and he said, "Jesus cwying". I said, "Why did Jesus cry?" and he said, "From da nails on da cwoss". So I guess he did get some of it. :) 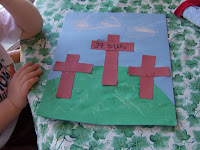 Z also decided to do his own experiment this week. In case you've ever wondered what a half a box of Splenda poured out on the counter looks like, well, here you go: (also, I am so cheap that I put most of the Splenda back in the box, except for the bottom layer, because seriously, that stuff is like five dollars a box!!!) 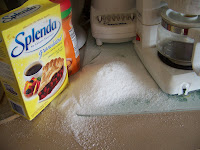 The weather was so beautiful this week that it worked really hard on melting our snow -a couple of days were in the 60s! Here is Zachary, shoveling the snow still on our porch, in short sleeves. :)

And here is Zachary's hilarious new trick - this makes his daddy laugh SO hard every time - he will kiss the bottom of his own feet. It is so funny. :) 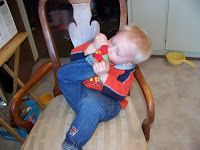 I'm looking forward to a couple more Easter crafts this next week, and I'm working on a letter matching game that I hope to have done soon.

Great tot school pics. I have got to do an Easter craft with Jacob one of these days. We love making Easter really special. Not spending what we do at Christmas, but we try to get one special thing and talk to Jacob about the special importance.

Those lacing cards are adorable!! And i love the cross craft.

Nothing is more amazing than seeing your child recognize the truth of Jesus Christ! I really don't even know you, but I'm so excited for you that Zachary is understanding (at least a little bit) what Jesus did for us.

I may borrow your art project idea for this coming week, if that's okay with you!