This week, we were able to do a lot of Tot School activities! But before we get to the projects we did, I thought I'd share a couple of 'normal' activities that are just as much a part of little Z's classroom as the planned activities are! Every morning, Z has 'water play time'...as I do the dishes. We have a double sink (no dishwasher, boo hoo), so I separate the dishes with all the breakable & sharp items in the left sink next to the dish drainer, fill this sink up with soapy water, and leave all the plastic dishes in the right sink, with a cool stream of water coming out of the faucet that Zachary can play in - he dips the dishes in it, dumps the water out, pours, and sometimes even holds his hands (or head) under the faucet for fun. :) 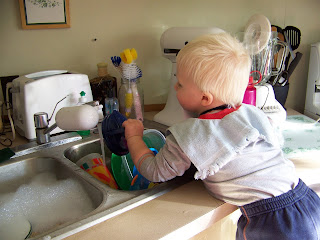 He has his own little broom which he likes to use while I sweep, which is fun unless he starts sweeping in the middle of my dirt pile...I usually ask him to sweep in another part of the room. :) It's pretty cute when he waves it around to get the 'copweps' like Mommy does, too...and nothing's gotten broken yet... :) 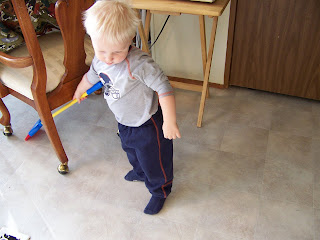 So, as far as Tot School this week, we did several normal activities throughout our days, including coloring, reading books, playing with our stuffed letters, and playing with his favorite 'shapes' puzzle. We did two 'crafty' activities during the week, with a fall theme.

On Wednesday afternoon, we baked peanut butter rice krispy treats - Z helped me count out the 6 cups of rice cereal, and I handled the rest of the 'boiling goo' part. Then we waited for them to cool down, and attempted to use cookie cutters to cut out fall-shaped rice krispy treats. It was WAY too hard for Z to even cut them at all, but he had fun trying. It was almost even too hard for me to cut out anything with a plastic cookie cutter, so after we did a few, I switched to a metal cat-shaped cookie cutter & did a few more. Then I made some orange icing (just powdered sugar, vanilla & milk until it looks right), and let Z paint the cutouts with the frosting. 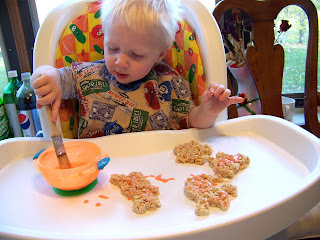 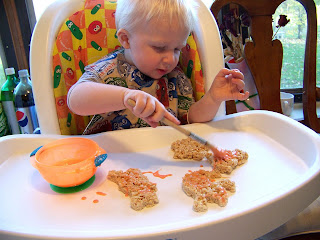 He had a great time, and really enjoyed painting the cookies... 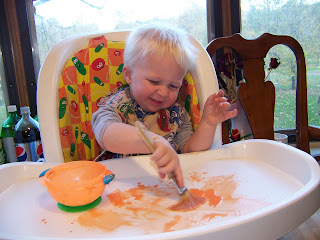 and on his highchair tray. 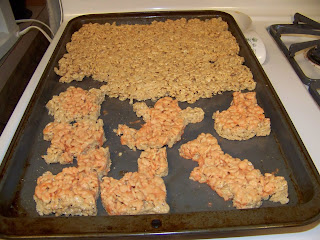 Here is the finished product (notice I gave up halfway through the pan, partly b/c it was so hard to cut the treats & partly because I was too tempted to eat ALL the surrounding 'extras' - as you can see, there are no longer any in the pan...). :)

On Friday, a rainy afternoon, Z & I tried pumpkin printing: hat tip to No Time for Flash Cards for this cute activity. 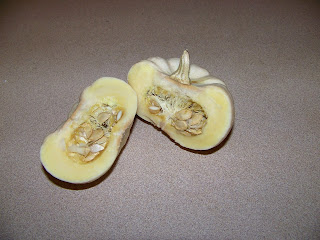 First, I cut a (white) mini-pumpkin in half. It was actually REALLY hard to cut the pumpkin, keeping it straight so that we could stamp with it - I had to cut it & then straighten/flatten each half. 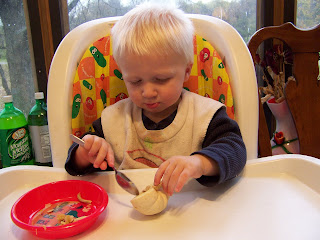 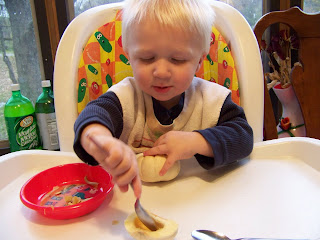 Then Z & I used spoons to clean out the 'yuckies'. Z actually didn't do much in this part - he touched the seeds a couple times & fussed because he thought it was so yucky. 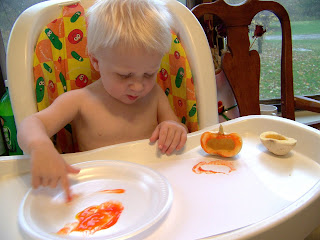 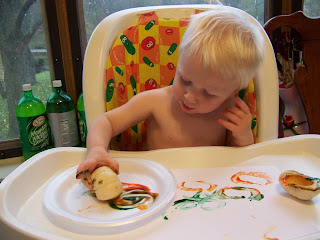 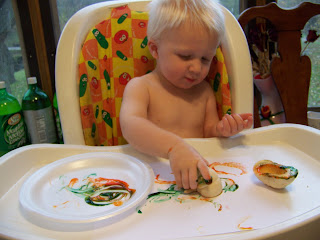 Then we 'blooped' some finger paint on a paper plate, and dipped our pumpkin halves in it, and stamped them on the paper. Z's favorite part was mixing up the paint with his fingers, but he did dip & print a couple of times. 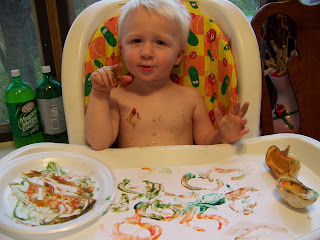 So that was our week! We also spent a LOT of time outside, since the weather was beautiful! On our rainy Friday evening, we also watched an episode of Clifford (if you're a toddler, it's pronounced Kyipperd) for a special treat. Z enjoyed the parts with all the dogs, but wasn't quite as into it as he is when he watches Sesame Street.

And, in conclusion, I have a question for you all - when should Z start using a real cup at meals, and real silverware & all? I try to give him a fork or spoon (little plastic ones) when it's appropriate for his meal, but I pretty much use a sippy cup all the time, and I still feed him in a highchair, with food just on the tray or sometimes in a bowl (suction bowls for messy stuff like soup/yogurt, regular plastic bowls for eggs, hot dogs, etc). Should I be feeding him at the table instead, with a plate, more like a big kid? What age did you start that 'big table' training with your kids?

To check out more Tot School posts, head on over to the Tot School website!
Posted by Carrie at 2:09 PM

You are doing such a great job! I cannot wait for Scotty to be big enough to do fun stuff like that with! Z really seemed to enjoy that paint! {grin}
As far as eating at the table, here is what we do - not that it is "right", but it works for us!
When our children turned a year, we take the tray off of their high chair and push them right up to the table. It is at this same time that they start to eat on plates and bowls. Scotty has done really well. We had to use a few hand spanks the first few days for throwing his dishes, but he caught on VERY quickly! {wink} He now uses plates and bowls with no problem. Probably around Christmas time, I will introduce a fork and spoon. What we did with Cadi is just give them to her. If she used hem great, if not, no big deal. The biggest thing, was not throwing them off the table. I am trying to remember when we weaned off the sippy cup. Jim and I were actually just discussing that. Jim thinks we had started at Scotty's age with Cadi, but I don't agree, lol.I thought it was closer to two. Jim, however, has given him milk out of a regular cup on a few occasions, and he has done surprisingly well. I don't think he is quite ready though!
Just do whatever works for you - eventually they all learn how to eat properly (well for the most part!) at the table. {grin}

I LOVE that you let him paint the frosting on those treats!

You look like you're having so much fun!! We "paint" our frosting too - on cookies and things. It's a lot less frustrating than "real" frosting for the kiddos.
We switched our kiddos at age 2 - mostly because at 2 a new baby was born! They graduated from the high chair then, so that by the time the next child was in it, they no longer felt "possessive" of it. We do have a booster seat, too. Miss E switched to a regular cup out of excitement - someone gave her a pink cup with a handle and that's all she wanted to use. Z it was out of necessity - I had bought some cheapie sippie cups and they all broke before I could get to the store again, so he had a "real" cup and felt like a big boy. Both were about age 2. I agree with the previous poster about the dishes, silverware,etc. It just takes a few days of discipline and then they've got it - perhaps not in their mouth...but at least not flying off the table!