8 weeks from today, my little girl will be here!!! It seems like such a long time, but we still have so much to do in order to get Z's new room ready, and I am SO looking forward to organizing all of her sweet little clothes in her room, and adding a few pink accents here and there!

Zachary and I have been enjoying the fall weather as much as we can - I think the snow we had last week reminded me that fall won't be here forever, and soon it will be more difficult to get out - so we've been spending lots of time outside. We even had a picnic by the creek in our yard after MOPS on Tuesday morning. 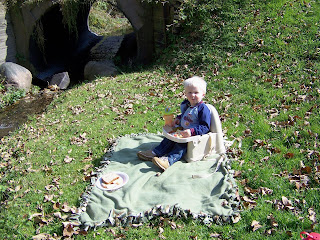 I'm not sure if Z is starting his 'terrible twos' a few weeks early, or whether he's just showing the lack of discipline (because, really, I am NOT that great at discipline, I really struggle with consistency vs. laziness most of the time), but he has been a real challenge these last few days for me. He doesn't want his daddy, which makes me sad, sometimes he has been a real stinker for him, refusing to even go to Daddy and give him a hug sometimes. I know he loves his daddy, and he talks about him when he's not here and looks forward to him getting home, but he just gets this glint his eye and refuses to go over there. And he has been hitting/pinching/pulling my hair a lot again lately. I am really trying to teach him to obey the first time, but, oh, it is so HARD sometimes!!!

He's been saying a lot of funny things lately, just repeating things he's heard which are rather hilarious coming out of his little mouth. When struggling with something in the living room the other day, I overheard him exclaim, "Oh, Man! Oh, Boy! Oh, Guy!" :) Then, as we were walking home from camp another time, I was getting rather frustrated with the fact that my maternity pants ALREADY will NOT stay up (seriously, people, it is RIDICULOUS how often I am hiking them up. A couple people have suggested suspenders and I am rather open to the idea at this point - with 8 weeks to go, it should not be THIS bad yet!!!). Anyway, I uttered some exclamation like, "Oh, I am so TIRED of these PANTS, can't they just stay UP for goodness SAKE!". And the next thing I knew, he threw his little blond head back and yelled at the top of his lungs, "SAKES, Mommy's Pants, SAKES!!!". Which of course made me laugh hysterically in spite of the fact that my pants were around my knees. :)

And tonight as I was helping with some dishes in the camp kitchen, I realized I hadn't seen him for a few minutes, so I went around the corner, and there he was behind the baker's table. He had a measuring cup in his hand, and was scooping brown sugar out of a bin, and into the large mixer, one scoop at a time. I guess he was cooking. :)

And, oh, in spite of the fact that he knows how to push my buttons better than anyone else sometimes, and seems to enjoy when Mommy gets flustered and frustrated, how I love this little guy. 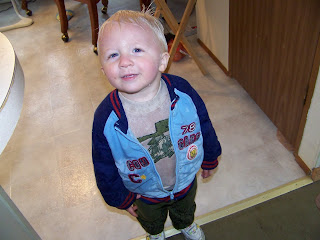 Sorry about the pants, lol! I love this post, he's really such a cute little guy. :) I just wanted to say around the same age my son had a similar issue with his daddy. I began to see that he really missed daddy during the day, but if Dad came home and didn't immediately spend some one-on-one time with him, M felt somehow that Daddy wasn't quite as excited to see him as he was to see Daddy. Does that make sense? And then he reacted with a little rejection, which made everyone feel awful. I mean, if my husband even took out the garbage before sitting and spending a little time (even 5 minutes) to make M feel special, M would react this way. Almost as if he were saying "I missed you so much, but I can't show it because I'm not sure you missed me." So rejecting him, hurting him, etc. felt safer than being sad. I sure hope that makes sense. When I suggested to my husband to immediately sit down and cuddle with him, be totally excited (over do it) to see him, hug him, play with him for 10 minutes first thing, things turned around in one day of doing this! I hope that helps - just a suggestion. :) Sorry so long!!

Nicole, thanks for the suggestion! Usually, though, my hubby comes right in the door & the first words out of his mouth are, "Hey, buddy! Come give Daddy a hug!" and he won't - he'll fuss, 'mommy, mommy' and stick to me - it is just heartbreaking to me because I really want him & his Daddy to enjoy each other! I know that it's just a stage, but it makes me sad!

Cute, cute, cute little man. And Wow...you're that close to meeting your little girl! CANNOT believe it! And CAN'T wait to meet her!

Oh, you know they love you so much when they know you so very well. :)

Crying and laughing - he is so funny! And it's just crazy the things they pick up and you don't even know until they're repeating it. I know what you mean about discipline - I didn't get after my Z for a while about things and now I really have to get after him more. I think I spent too much time laughing at his naughtiness...they're just so cute when they're bad!