It was good to take last week off, and take a nice vacation with my Hubby's family, and then unpack and relax the rest of the week, but it was nice to get back to school this week, too. :) We tackled the letter C, and enjoyed it very much. :)

Here is our morning board for the week: 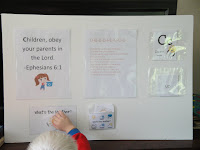 Z learned his verse very well, and if you can't tell, the song is O-B-E-D-I-E-N-C-E from Patch the Pirate, a favorite from my childhood, and he learned that really well, too, so we sing it often - such great words about obedience! Our Bible story was Jonah, and when we reviewed it today I asked him where God asked Jonah to go, and he answered "Nineveh!" :)

Here he is doing his Starfall calendar:

We play Starfall most every day, he will play while I'm folding laundry behind him.

He earned a few more new sight words this week! He also earned 'up' later in the week, too, but I didn't get a picture of the wall again. Also - though he knows these words on these cards, he can't always recognize them in books - is that weird? Does that mean he doesn't really know the sight words? A friend suggested that it is because of the different fonts in children's books, and I thought that was a very logical explanation. Anyone else have any tips/ideas? 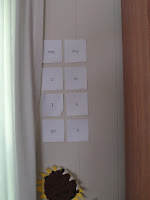 We picked up an Aqua Doodle mat at our local thrift store last week for fifty cents! We have been using an envelope sealer as a marker, since it didn't come with any markers or anything. Z loves it! He drew a potato - can you see it (near his head)? :) 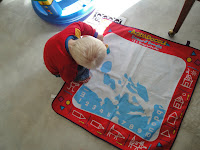 We also used the back of the mat when he played with his bottle cap word cards, but it was slippery and we almost fell a couple times, so we won't do this often - but maybe on the living room carpet, it might keep these kind of learning activities that have little pieces more contained! When I got the word cards out, he found his name by sight, so that was exciting, and he also found the m and p from camp & matched them up before getting distracted by something else. :) 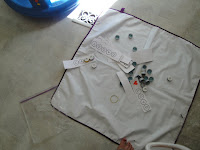 We used our consonant cards to introduce the letter C (and review B).

We also did our A-C clothespin cards, but I didn't take any pictures. :)

We used our C playdough mat this week - here's Z showing off his ring (he wanted to keep it on till Daddy got home, but I talked him into just taking a picture instead): 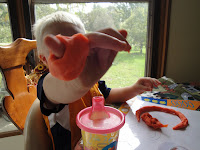 We also traced on the mat with wipe-off markers: 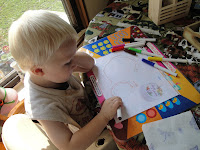 He played with his alphabet desk this week, and was able to find several of the lowercase letters! 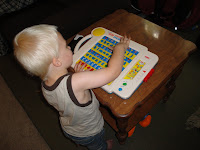 We always have a good time with our letter collages! We added glue to our letter C this week... 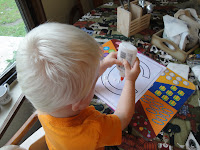 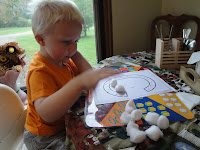 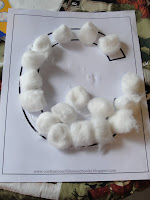 Then we mixed up some puffy paint (3/4 cup shaving cream with 1/4 cup white glue), though we put too much shaving cream in ours this time and it didn't dry well! :( Anyhow, we measured it out... 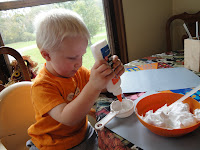 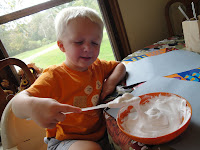 and had fun with it! 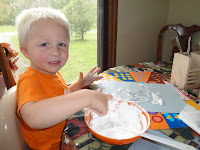 We made clouds on blue paper, which was a lot of fun! 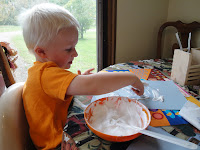 We even painted with the spatula some! 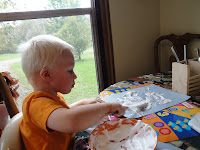 We went for a bike ride this week, and Z pedaled around quite well on his little trike! 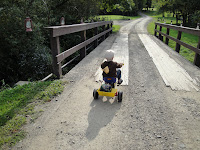 He rode all the way down a kind of big hill from the basketball court at camp to our house - I was very proud! When we bought the bike in April, he had no clue how to pedal and had a really hard time with it, so he has learned a lot in the last few months! :)

Natalie's biggest accomplishment this week was pulling up to stand! She will pull up on boxes & stuff around the house, but she hadn't pulled up in her crib yet. Then Friday night I laid her in bed, and after a few minutes, she started SCREAMING, so I ran in to see what was wrong. The poor thing was standing in her crib, with a death grip on the bars, petrified about falling, and with no idea how to get down. Hilarious! :) I calmed her down and she went right to sleep and to my knowledge it hasn't happened again! :) Here she is standing up one morning:

I got a new hiking backpack for $1 at a local thrift store - here she is enjoying it on our walk this week:

And, for her next trick, she will read a book! :) Okay, not really, but she loves to play with books and I thought it was cute: 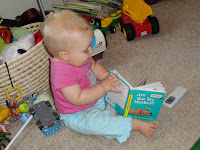 I try to read a book every day with just her before she goes down for her nap (and after Z lays down). She loves reading already!!!! :) I especially enjoy reading touch and feel books to babies at this age, they are so enthralled by the textures. :) 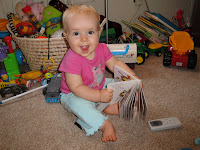 Here she is sleeping like a rock just when it is time to leave for church (just for fun!): 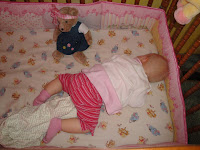 I haven't even started and already I feel like a FAILURE....I don't even know what you mean site words or whatveer. Argh...

You are so good at motivating!

That shaving cream puffy paint looks awesome! Zachary is so young ~ don't worry about the sight words. Looks like you are doing lots of hands on learning fun and that is the most important thing right now! Have fun and make learning a joy. =)

Puffy paint looks like a good time. I should be a good mom like you and not be afraid of the mess. :o)

It sounds like he might be memorizing the shapes of the words that you are sharing with him. (Same as he would actual shapes or pictures.) But that's a good thing.

Reading is such a developmental issue that I wouldn't worry whether or not he actually reads them at two. I've taught a lot of kids to read and some are ready earlier than others. It clicks when it clicks and 10 years down the line, you really can't tell the difference between the kids who learned at 3/4 and those who learned at 8 and up. When it clicks it clicks and suddenly that reading will just take off.

My oldest taught herself to read (well) at the age of 3.5 with no help from me (starfall and leapfrog) but she had a STRONG interest in learning to read on her own. I would've never thought to teach her. (In fact, I pretty much refused but I guess she showed me. LOL I did give her a little instruction after I realized that she was reading quite well, lest you think I'm horrible.)

My current tot shows no interest so I imagine that she'll start around 5/6. Or maybe later because she's so stubborn. She is fairly adept at memorizing her favorite books. But she just recites them. She has no knowledge that the letters on the page have anything to do with what I'm saying outloud. It will be an interesting ride with her I'm sure.

With her I just read to her a lot and I'm just exposing her to letters with no expectations for her to even start recognizing them anytime soon. Although apparently she knows T. And we're only on F. She must be paying attention to the videos closer than I thought. LOL

I love the pictures of your kids at the top of your blog! Two little cuties!