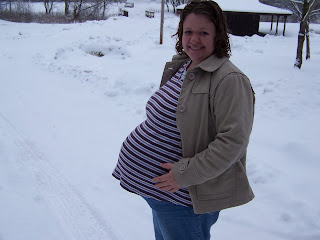 So, we had the induction scheduled for Monday afternoon. We were to arrive at the hospital at 5:00. We celebrated with a quick lunch together at McDonald's, went home, and I tried to rest (yeah, right!) for a couple of hours while Hubby finished up some final tasks at the office. We showered, took one last enormo-belly picture (above), and headed to the hospital! I was so excited to say, "Hello, I'm Carrie, and I'm here for an INDUCTION!!!" :)

We had to fill out all kinds of paperwork, I got blood taken, an IV set up, and those stupid belly monitors all stuck on my belly. {Speaking of which, if someone could invent an external fetal heart monitor, and contraction monitor that ACTUALLY stayed on, and did not have to be adjusted every 20 minutes (TAKING 20 minutes each time), they would make a FORTUNE. Those things are DUMB. Just saying.} Anyway, the good news was that I was starting out my labor at 3.5 cm dilated (out of 10, in case any of you were wondering) - so apparently those 'useless' contractions I'd had all week had been doing SOMETHING after all.

My doctor stopped by around 7:00 or so, and started me on some Pitocin. I asked her to break my water, but she decided not to, giving a vague reason about me being overdue & possibly having low fluid levels...? After just a few minutes, I started having some mildly uncomfortable contractions, and after a little while, they were coming just a few minutes apart. I had to lay in the bed for about an hour to make sure the fetal heart rate was good, but then I was able to get up & stand, walk, and sit on the birthing ball.

This was a new experience for me, since when Z was born, I had to stay in bed during the whole labor. I rushed to the hospital too early with him, thinking my water had broken when it hadn't, and during the process of being checked out, his heart rate dropped twice, so after that, I was confined to the bed, and that was not pleasant. I was really looking forward to a more 'natural' labor this time, and being able to walk around, and it really did help, especially during the early stages. So I labored, changing positions every 45 minutes or so, spending 20 minutes each time with a nurse adjusting my monitors, and then laboring through my moderately painful contractions.

At 2:00 am, my doctor called to see how I was doing. Holding steady at 4 cm, thank you very much. So she called off the whole Pitocin operation for the night, and they offered me a sleeping pill and a chance to start over the next morning.

I was SOOOOOO completely and utterly disappointed, I cried when the nurse was trying to help me decide what to do. Even at this point, some part of me honestly believed that Natalie would NEVER be born. Hubby tried to decide whether to go home or sleep in the delivery room (on a recliner or the floor), but I was afraid that my labor would continue on its own & he wouldn't be there - and our house is a half hour away, so I talked him into staying - poor guy. I got my sleeping pill & my lovely hospital bed, and warm blankets....and he slept on the hard recliner & floor with no sleep aids. And I don't think he actually slept much. :(

And after the Pitocin was turned off, my contractions slowed down to next to nothing as well. So my fears were for naught.

But the next morning is the REAL beginning of Natalie's birth story. (Spoiler alert - She DID eventually come out!) :) 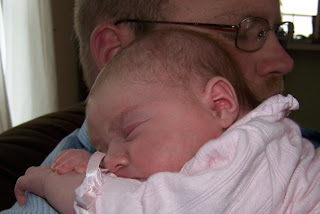 Oh, I loved reading this! So glad it is over for you, though. And Natalie is just gorgeous!

Tag, you're it! Come check out my blog! And know I am going to read this post. {wink}

Loved this! Cannot wait to read the rest! She is so beautiful, Carrie.

What a beautiful little poppet!