This was a busy week, and we didn't do too many formal Tot School activities. We did spend time doing some of our favorite puzzles (such as this one, which he can now do all by himself), playing with our letter blocks, and spending some time outside. In house-building class this week, we learned more about laying block, and Z got to spend a few minutes playing that he was driving the camp's tractor. He learned to use the tractor's turn signals, too, which is always an important lesson. :)

One night, Hubby & I were able to get out on a date together, which was nice, and Z spent nearly the entire evening with his babysitter coloring! Somewhere along the way, he even got a hold of a pen, and she let him color in his coloring books with a pen. And he didn't forget how to use it, either! The next day, we were walking around the house with our brooms, I was making sure there were no cobwebs in the corners, and he was whacking stuff. I heard him repeatedly whacking the wall in the hallway, so I stuck my head out to ask him to be gentle and not hit the wall, and he was actually writing on the wall with a black pen! He was very proud of himself, and didn't realize he had done anything wrong. So we had a little lesson - we tried to use a rag to wipe the pen off, but it didn't come clean. And we discussed writing on paper with a pen, not on the wall. He ended up realizing that it was wrong, and when Daddy came home, and we had to tell him what happened, his little eyes looked down, and I could tell he knew not to do it again. Sometimes now when we're in the hall, he will point to the pen marks and say something like, "I use a pen. No write on wall. Write on paper." It has been neat to see him absorb this little lesson, and it has taught me not to jump too quickly to discipline, but to make sure he understands the reasoning behind the rules whenever possible.

We did bake together this week, which was a fun time for both of us.

Here is Z in the kitchen, all ready to mix up our pumpkin muffins. 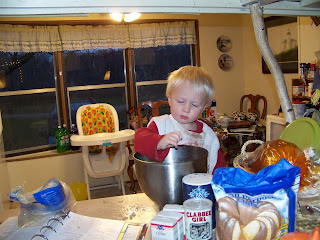 He helped me pack down the brown sugar. 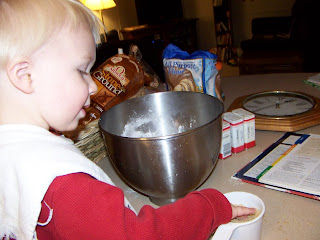 He dumped each of the ingredients into the mixing bowl after I measured them out. 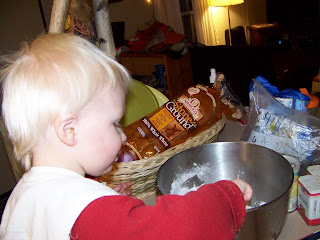 He helped stir the batter. 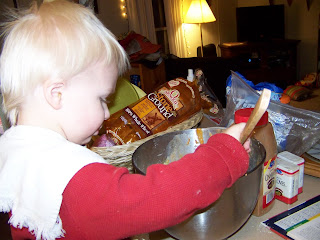 And, of course, his favorite part, watching the mixer mix the batter up! 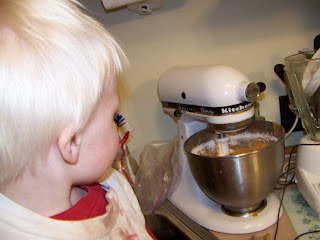 He wasn't really able to help with the scooping of the muffin batter into the tin, though, just because of his height and the awkwardness of the counter level....maybe another time I would think to spread something out on the floor & have him help me down there. I didn't get a picture of the finished product, but we made two dozen pumpkin muffins...I think we have about 8 or 10 left... :) Yummy! 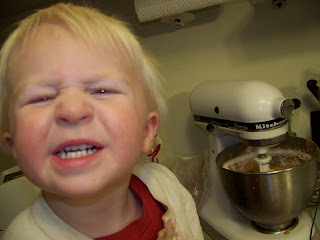 Hope you all are having a great week, and have a great Thanksgiving holiday! We hope to do some kind of turkey project later this week, and to relax as a family on Thanksgiving, and then decorate for Christmas this weekend - so those are my goals for the week! :)

Check out more Tot School over at Carisa's!
Posted by Carrie at 1:45 PM

What a special time you had with your little man. I love to bake with my daughter as well.

I love the last picture!!!! He is so cute. So neat to hear he is learning and growing.