This week, we didn't do a lot of projects for Tot School, but I was able to get some pictures of some of our favorite learning play activities. And I was able to take time (during a weekend hobby retreat, when my hubby watched our son during the evenings & I spent time crafting) to make some new Tot School activities, which my son is loving. So, here we go! 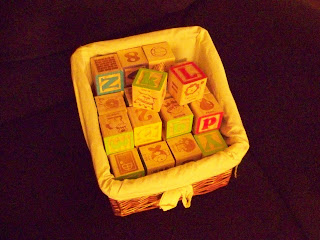 One of our favorite toys/tools recently has been these wooden ABC/number blocks. I love that they have upper and lowercase letters on them, plus all the numbers, and pictures of things that begin with each letter. Z loves to build with them (though recently he gets frustrated when his towers topple), and he loves to name the letters, numbers and pictures. Each block has an uppercase letter on one side, and the lowercase on the other side, so right now I use them to tie together the upper and lowercase letters - Z has a pretty good grasp on his uppercase letters, but the lowercase is still mostly a mystery.

I also bought these alphabet and number flashcards last week ($1 at Wal-Mart), and I know, they're flash cards - boring, right? 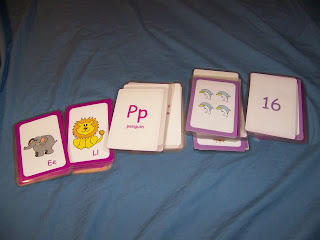 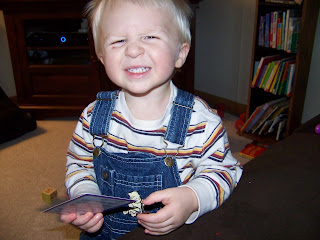 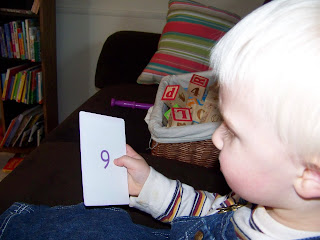 Well, you just have to know my son - he loves cards, and even junk mail stuff is exciting & must be read before being thrown away. So he loves these cards - he loves the pictures, and, again, I am using them to tie together the upper & lowercase letters, as well as exposing him to the numbers 10-20 and even some animals he doesn't have much experience with...such as whales. 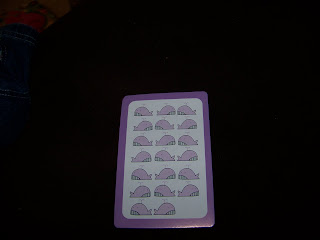 While we were looking at the cards this day, I made a sound which I THINK a whale makes...kind of like a high-ish-pitched sighing/moaning sound...and Z looked at me & said "Whales tired." Apparently my whale-speak sounded more like a yawn. :) I was able to laminate the flashcards this week with the camp's laminating machine, so I can just hand them to Z & not worry about him bending them.

I was also able to make a color-matching game, which idea I picked up from Tools for Tots here. 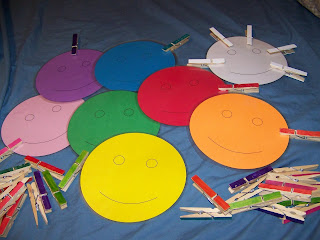 I just printed my circles (actually smiley faces, which Z loves), on several different colors of paper (which I borrowed from camp), and laminated them, and then colored my 'matching' clothespins with colored Sharpies. I ended up doing the white clothespins with craft paint, and really liked how they came out - if I had it to do over again & if I wouldn't have had to buy 8 colors of craft paint, I would paint them all instead of coloring them - I think the colors would be more 'real' on the wood. 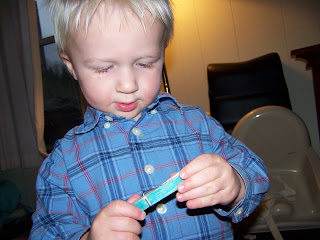 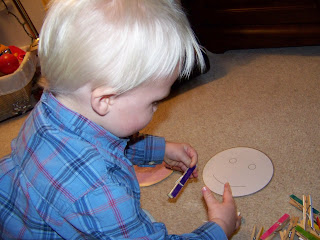 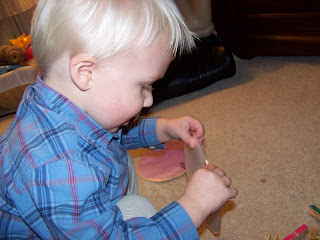 But Z enjoyed playing with them anyway. This first time, we focused on opening the clothespins, and had a good dialogue about the colors, but he wasn't able to clip them on the smiley faces. His favorite part was picking up the clothespins and putting them back in the bag, and also this 2nd game that we made up on the fly: "Stand on the color". He liked standing on the different-colored smiley faces, and thought it was funny to also grab a smiley face of a certain color & put it in front of his face (or mine). :) 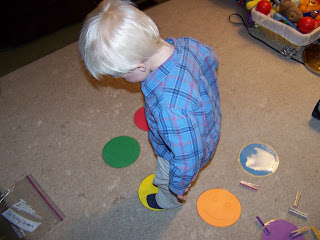 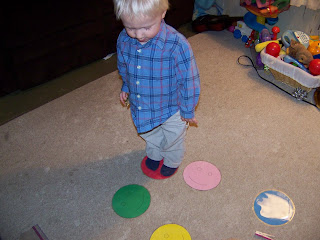 We also had a good amount of life school this week, as always. It was gorgeous weather, so we walked outside in the 'crunchy leaves', and since there was a retreat at camp, we ate our weekend meals up there, and were involved somewhat in helping in the kitchen (Z mostly runs around, makes a mess, and will occasionally brings dirty dishes to the guys in the dishpit or help pick up & put away chairs). The camp is working on building a staff house, and this weekend, they poured the concrete for the basement floor, so it took some slight rearranging of our schedule, but Z was able to watch the cement truck come in and pour some of the floor - I asked him later if he remembered the cement truck, and he didn't remember that it was yellow, but he did remember the guys "sweeping it with brooms" - they were using shovels/rakes to spread out the cement as it poured into the basement. It will be interesting for him to watch the house being built, and learn all about the different steps involved - it's been interesting for me to learn, too, that's for sure. :)

I am so enjoying Tot School, and I hope to get a few more tot activities made before our little girl arrives, that I can just hand to Z & play with him while baby nurses or plays during the next few months. :) I also hope to get a couple Thanksgiving and Christmas craft projects in, and build more 'creative' time into our days.

To close, here is Z enjoying a 'ladybug' that was crawling on our kitchen floor. Here is his ladybug monologue: "Ladybug! Ladybug on floor! Ladybug crawling on floor! I see ladybug. I touch ladybug." 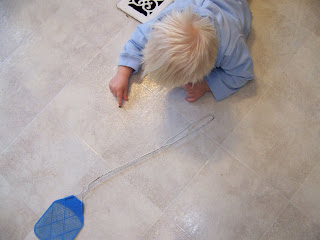 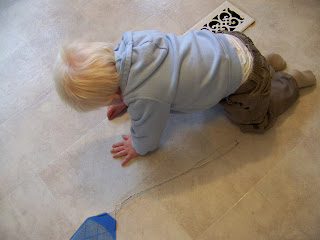 Those wooden blocks are great! A classic toy that I really wish we had at our house. I love the color matching game with the clothespins. I tried something with clothespins when my son was a little younger, and he couldn't do the clothespins either. I may have to try again soon though. Great activities this week!

Fun week! We have those flashcards and my son loves them! I punched a hole in them and put them on a keyring, and he loves to "read" his flashcard book. My two boys are almost the exact age apart that your two kiddos will be. It's challenging at times but so much fun!

Heather of the EO said...

I love the faces and clothespins! We are going to have to do that at my house.