Tot School was fun this week - we definitely had a lot of Life School - I worked Monday and Tuesday mornings, so the kids stayed with a staffer then. We went up to camp every day (except Saturday and Sunday) for lunch and dinner, and played on the playground a few times. Senior high week was a success - we had the most campers we’ve had in any year on record (we have records back to 1990) and I think everyone had a great time!

One day last week, they were working on our road, using a scraper to scrape up the weeds and dirt on the side of the road, and a loader to scoop up the dirt and put it in a dump truck, so we stood outside and watched that for a while. Z especially liked the scraper, because there is a toy Tonka scraper up in the camp sandbox that he likes to play with, so he made the connection there.

We also did several learning activities, including chalk, play-doh, coloring, bath letters and numbers, another color scavenger hunt (purple, yellow, and orange this time) and I Spy. I got four well-worn I Spy books at the thrift store (for free!) a few weeks ago, taped them all back together with packing tape, and decided to try them with Z - he LOVES looking for things in them, and there is just so much to look at in those books! They are a big hit! Eventually, we'll have to invest in some that aren't held together with tape! :)

We also started the adventure of having Z sit in the church service with us, since our church has given the PreK church staff a break during the months of July and August - it went alright, he never really yelled or got too upset, but he wasn’t overly quiet either. We sat in the back row, played I Spy, read books quietly, played with flash cards, and Z played with a small foam alphabet puzzle in the floor by his seat. I have been planning to try to help him learn to sit, but just haven’t found the time, so I was glad it went so well!

To start out the pictures, here is a shot of Z in his 'Coat of Many Colors'. It is made of butcher paper and colored with crayons, taped down the sides - Z made this at a church where Hubby spoke during their Sunday school class. I thought it was cute, so I thought I'd share! :)

We made 'fireworks' out of coffee filters this week, to celebrate Independence Day. I had this craft all planned, and then I realized that Z did not know what fireworks were, since he's never been to them! So we had to watch a YouTube video of a fireworks display before we made our fireworks! :) Didn't get any pics of the process, but we basically colored on coffee filters with markers, and then cut 'fringies' - Z's word - around the edges so they looked like fireworks. Here they are on display in our living room:

I did get time to make a simple alphabet matching game for Z this week, using some white and some clear plastic spoons. I found the idea here. This game is super affordable (about $4 for all the spoons, and I have some left over in case one breaks...or gets bitten in two...more on that later...), and really easy and quick to make - I just wrote each letter of the alphabet on each set of spoons - one set lowercase, and one set uppercase. Then we matched them to our alphabet flash cards - to make it more difficult for an older preschooler, you could put out cards with just pictures on them, and have them match the spoons to the picture that starts with that letter, or just match the two sets of spoons to each other! 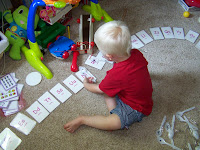 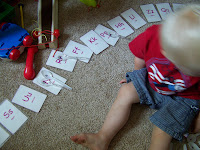 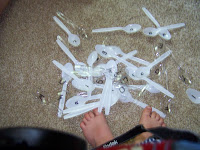 Z is really into cutting lately!!! He loves to cut anything at all, and is getting better at using only one hand. He spent about ten minutes cutting a magazine in church, until he said his hand hurt, and he stopped. Here he is cutting a cardboard piece from a pop box. 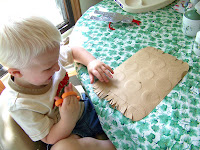 He was using this measuring tape to measure around the house - everything is either 'two ounches' or 'three ounches' long. :) 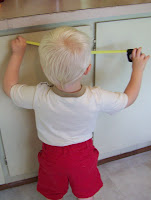 And playing golf on the porch with an old golf club of Daddy's and a ping-pong ball. :) 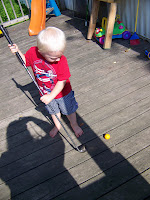 I love this picture because he's trying so hard!!! :)

Natalie was having so much fun watching Zachary play with his puzzle this week - she kept reaching out for the pieces and just loved watching him fish! She seems to be growing up SO fast, I think because she watches her big brother and learns so much from him! :) 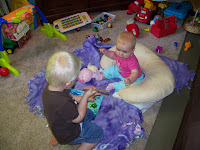 She is just growing up before our eyes!!! Natalie is six months old now, and eating all kinds of baby food - she loves it! Anytime I get a spoon for anything, her food, my own food, she gets all excited & bounces around because she thinks she's getting fed! :) She loves her exersaucer, and she has figured out that if she's in the right position, she can look at herself in the oven door like a mirror! :)

She can sit up for about ten minutes, in the Boppy, without any help!

And she can roll over, and over, and over, across the room - she chewed up her first book this week - sadness!!! I keep telling Z that we're going to have to start being careful about what we leave laying around! But she's pretty happy, so I think we'll keep her. :)

We had such a great week, and really enjoyed our times together! I am working on planning for the fall, I'm going to try to do a letter of the week theme, with monthly unit studies, so I've been working on that - I'm almost to the part where I plan each week in an excel file, and I'm getting super excited about that part! :) I'm trying not to let myself stress out about it, too, and reminding myself, "This IS still tot school - he's only turning 3 this year, he doesn't have to learn everything and do every fun activity I see THIS year!!!" :)

Looks like another fun week at your house!! I love Zachary standing so proudly with his coat of many colors... & little Natalie is precious- isn't it amazing how fast they grow!?
Jessica

My kids really like the I Spy books too! They're a lot of fun. Your so crafty and organized about doing things with Z. Good job :o)

aaaw they are both so cute. Love the pics with the tennis and golf stuff. He looks so tiny lol x

I have an almost 3 year old, as well, and I wanted to do a firework craft with her, but didn't because I didn't think she would remember what fireworks were from last year either. I just wish I would have thought about the internet and showed her like you did!!

Love your ideas and thank you for sharing!

I love the pictures in your new header. Very nice! (Perhaps they've been here for a while; we took some time off from Tot School.)

I'm very impressed that he has the patience to go through all the spoons in the spoon game. Wow! :)