I haven't posted in a while, and I really don't know why. I've been tired lately, but not feeling too nauseous. I've been keeping up on everyone else's blogs, commenting, tweeting, and all that. So I guess I will write a swirly post, attempting to catch everyone up on what I've been up to over here.

My parents and sister (5 yrs. younger) came for a visit last weekend. It was really fun to watch them interact with Z, and to see all the things that he learned while they were here. He called my sister "Ella", which is nothing close to her real name, and he pretty much adored her. We all went to the Buffalo zoo last Monday, and that was really fun- he loved watching the sea lions (you can watch them swim around underwater), and one big turtle in particular, and he loved the seagulls who ate one of his chicken nuggets when he dropped it at lunch. He liked the bears, too - he called one of them a kitty. :) So it was a nice visit, and really good to see my family.

A few weeks ago, I bought Z a little pair of green & yellow crocs, which he now loves. He calls them 'cwocs', not shoes, and always chooses to wear them instead of his other shoes. :) Here he is sliding down his slide in his cwocs. The slide has since been fixed & we have also removed the tree from our porch. :) 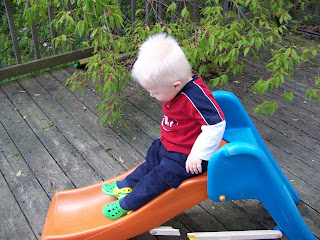 I bought a 7-yard length of a stretchy jersey knit fabric last week, and cut it in half lengthwise to make my own homemade Moby-ish wrap. If you go to Moby's website, they have all their instructions for public viewing, so I've been using those to practice the different holds. I like it so far, and Z & I have had great success with the hip carry & front tummy-to-tummy carry in it...but I canNOT for the life of me get the hang of any back carries with it yet...and that's kind of why I wanted it...I'm sure I'll use it a lot with a newborn, too, but I really bought it for comfortable back carries later in my pregnancy. :( So I am still using the Patapum for my back carry in the camp kitchen, which is working alright, I just have to wear the hip belt really low & it looks kind of funny. :)

I went shopping for maternity clothes this week, on the way to a bridal shower at church...I actually found 2 pairs of shorts (one stretchy & one Motherhood maternity) and 2 pairs of pants (one stretchy but nice for church - I'm wearing them today actually, & one pair of maternity JEANS for $2!!!) at Sal-Val, and I spent a TOTAL of $11!!! Go thrift stores! I enjoyed the bridal shower, too, and Daddy & Z had some 'guy time' at home. Daddy picked up ALL the toys & also did the dishes for me along with babysitting- what a great guy! :)

Our pastor started a VERY convicting series on parenting today at church - I may write more about the series in the coming weeks, but here's just one super-convicting quote from this morning's message: "How many times do we as parents focus on just 'surviving' parenting, as if it were all about us???" And, wow, yeah, some days... This morning was all about the long-term view of our parenting goals & how we need to focus on our children's spiritual development. I hope to share more later.

Hubby has a cold, so he's taking a nap this afternoon in an effort to be rejuvenated by the time he leads songs & has KidZone practice at church tonight. I put Z down for a nap at 3, so he would wake up in time to leave for church at 5:10, and...he went to sleep around 3:40. Sigh. So now I'm heading for the couch, where I will lounge & possibly nap myself for a while. And hopefully I will blog again before June. :)
Posted by Carrie at 3:51 PM

Love the crocs. Jacob really likes his and they are so easy to put off and on throughout the day.

Glad you enjoyed the visit with your family. I remember being very tired at that point in my pregnancy.