Well, we've finished our second week of school! We focused on the letter B this week, and we had a great time. Zachary seemed to enjoy the activities I had picked, and we managed to fit them all in, even though we were finishing our handwriting worksheet on Sunday afternoon... :)
We did Circle Time this week again, using our Circle Time Center, and I wanted to show that I actually got the gumption to put up our calendar, and we used it during circle time this week as well. 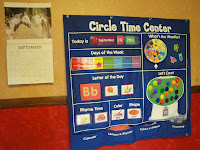 Our verse was Exodus 20:2-3 about not putting anything else before God, and our song was No Other God, from the Summer Celebration CD (website here). I loved studying this, and I had the song stuck in my head several times throughout the week! :) Our Bible story was about the Israelites crossing the Red Sea, since the song refers to it. We used the story from Egermeier's Bible Story Book.

Zachary dot-painted a sheet about the letter B (from Homeschool Creations). 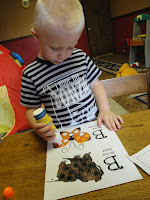 I gave Natalie a letter B from the A-Z Collage Sheets over at Confessions of a Homeschooler, and let her use it for crafts this week. First, she dot-painted on it. 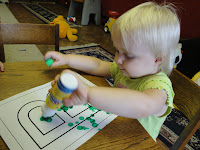 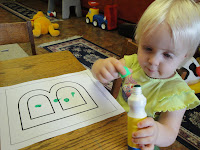 Zachary used COAH's Blend Ladders along with magnetic letters to make some words this week - he really enjoyed this, and it gave us a lot of good opportunities to talk about short vowel sounds, which he struggles with. 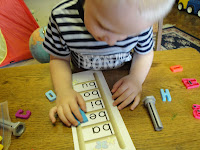 We made the word bin together. 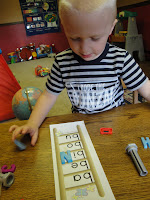 And then he made the word band on his own! 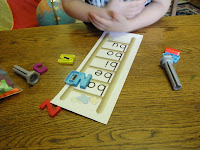 We discovered that the door from the schoolroom to the mudroom is metal & therefore magnets stick to it, so the kids played with magnetic letters on the door! 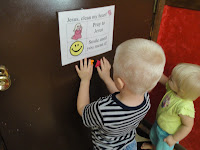 We used COAH's Alphabet Builders (I made these out of craft foam), and we made a big B and a small b. 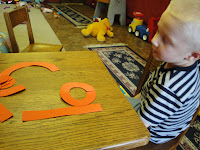 We did a Beginning Sounds worksheet from www.beginningreading.com - a great site for free preschool worksheets! Z enjoys identifying the pictures & he did a great job drawing circles around the ones that start with B! 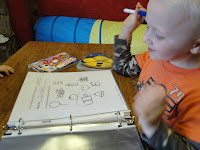 Zachary used a #2 handwriting worksheet to practice writing the #2. He got a little frustrated because I was trying to get him to hold the marker the way I would typically hold a pencil- I would be interested in hearing how others of you have handled handwriting and teaching a preschooler to hold a pencil! 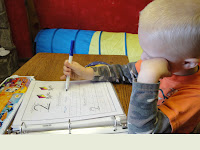 He colored the B page in an A-Z coloring book that I have, I think this is by Priddy books. 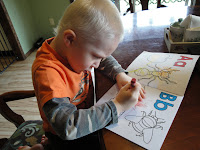 He colored in the lines and even traced the words on the page, which were bee & butterfly! 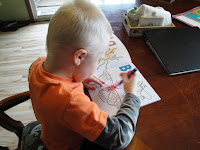 Our science theme this week was on bees and beehives, so we watched a couple of Youtube videos about bees - this one from Sesame Street, and this one about bees dancing to show other bees where the food is.
We also made a bee out of a letter B, this craft is from www.notimeforflashcards.com. I didn't get any pictures of us making this craft, but Z enjoyed gluing it all together. 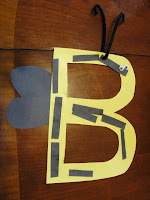 While we were making the bee, Natalie was fingerpainting with yellow paint on her B - here's her final result, I didn't get any pictures of her in the process either. :(

We did a letter hunt worksheet (while Natalie colored in the background - she mostly just put the crayons in & out of the box). :) Zachary had a hard time drawing circles around each letter B, so he pointed to them and I drew the circles. 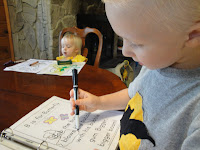 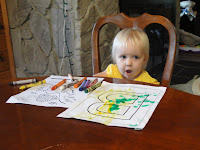 Zachary did a size sort with butterflies (from COAH).

We also played a Missing Numbers game, where you fill in the blanks with which numbers come next in numerical order. He did a great job with this, but didn't want to play very long. I put it in our binder with this week's work, maybe he'll play it again. :) 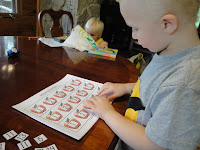 He also did a letter B handwriting worksheet, and again struggled with holding the marker. He did a good job, though. 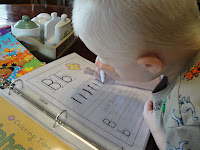 I thought that last small b was especially excellent - I was very proud! :)

He LOVED these M&M themed color-matching puzzles that I made for him! You can find them in the letter M section of Confessions of a Homeschooler's Letter of the Week curriculum. 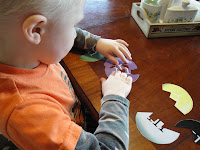 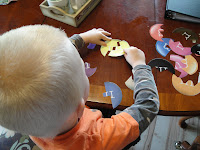 As far as 'Life School', we played played soccer in the yard, and discovered two really cool inchworms, and the kids also helped me make lasagna one day! They got to sprinkle the mozzarella cheese on each layer, and Z helped me lay out the noodles on the layers. :) 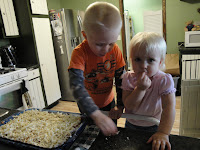 I am always so amazed at how God blesses us through a little local thrift store - their clothes (kids & adults) are $1 a bag, so we get a lot of clothes there, and their toys and books are free! So we get a LOT of books there, and occasionally some nice toys. We visited the store this week, came away with some great kids clothes, and a bunch of books, and as we were getting ready to walk out the door, they put out a big bag of Little Tikes waffle blocks!!! I had the basic set of these as a child, and we came home with a whole big tub full of them, including a set that makes a spaceship and has all kinds of cool 'space' stuff in it! :) Here's Zachary putting together the cute little alien spaceship: 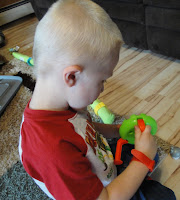 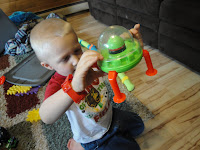 And, for some eye candy to close with, here's David in his Sunday outfit, almost smiling: (um, he turned TWO MONTHS old this week - where does the time go??? He is smiling more (but not for the camera much), and cooing occasionally, and just getting sweeter & more alert each day. :) 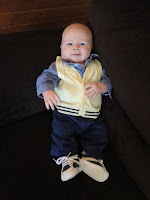 And Natalie, wearing my shoes: (have you ever seen eyes so big and precious???) Zachary has gone golfing with his daddy the last two Monday mornings, and so Natalie and I have had some fun one-on-one time (while Davey naps) each week - it is so fun to be able to focus on just her and play and read together. At twenty-ONE months now, she is talking up a storm, and it is hilarious to watch the new ways she can get across what she wants to communicate - it seems like she says or does something new every day! :)

I'm linking this post to Preschool Corner and Tot School, so head on over to those sites to see what everyone else did for preschool this week! :)
Posted by Carrie at 8:31 PM