God has blessed me in so many ways lately! I did not know how I would make it through this summer - it is such a busy time for our family - my husband's full-time ministry takes him to camp almost every minute that he's not sleeping in the summer and with our first two children being so young and so busy, and with me so largely expecting our third, I knew I would have to depend on God's strength, and not my own, but as usual, I am amazed at all the ways that God has provided for our family already!
First of all, I'd just like to say: ONE WEEK!!!! We are so close to our little guy making his appearance - finally!!! I really am not nearly as uncomfortable as I remember being at this stage with the other two- I am still sleeping in 2-hr stretches at night & I remember specifically that when I was in my last couple of weeks with Nat, I was up every hour and my hips were MUCH more sore with her pregnancy for sure. I think being late pregnant in the summer has helped, actually, because I am able to get out and walk every day, instead of being snowed in (my other 2 are December babies). And chasing 2 kids has helped me stay more active and flexible this pregnancy, too, I think. :) Although I would be happy to deliver tonight, believe me! :) I finally feel like all the 'essentials' that need to be done before he arrives are taken care of - hospital bag packed, car seat cleaned & ready to go in the car, adorable little clothes washed & folded, guest room & bathroom cleaned for our families when they come, etc. :)
Speaking of cleaning: God has provided such awesome friends to help me out with that during these last few weeks of pregnancy! Earlier this week, two friends from camp staff (Judy & Jen B.) came over to watch my kids while I went to my ob appointment (seriously, God has provided so amazingly, I have not had to take the kids to an ob appointment without help this entire pregnancy, it has been such a blessing - my ob's office is VERY busy & you often have to wait a very long time, you never know, so it's kind of a big deal to watch 2 kids while waiting an hour or two). Anyhow, while those friends were here, they lugged my vacuum down the stairs, vacuumed my downstairs rugs, and then swept & Swiffered my floors. I was toooootally nesting that night, and with that motivation, I was able to get the guest bedroom tidied up for when my parents come. Then, on Friday, another awesome friend of mine (Anna) drove an hour to come see me & hang out, and specifically, she came because wanted to help me clean my house. :) Her adorable son is 4 months old, so I had the added benefit of holding him quite a bit, and watching my kids interact with him - and it was SO fun, I can't wait to see them as big sister & big brother (again). Zachary was especially adorable with him. :) 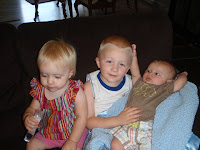 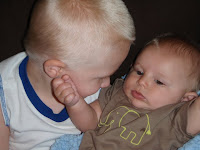 Anna ended up cleaning two of my bathrooms, including scrubbing two showers & floors (which would be WAY too much for me at this stage), and also, she saved me from a bat. A real, live bat. 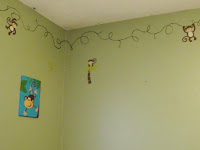 As I was showing her the baby's room, with its monkey stickers on the walls, I noticed a weird something on one of the monkeys. I went closer to look, saw that it was a little bat, and said something like, "Oh, Anna, nasty. Let's get out of here and shove something under the door so it can't get out." That was my entire plan for the bat situation. Close the door, shove something under it, and call husband. That is my Emergency Bat Plan, apparently. Anna, who is rather brave and once caught a mouse for me in my old house, had another plan. It involved a book, a bucket, a broom, an open window, and lots of whacking & screeching noises. As the door was closed, that's about all the details I know. But the bat is gone, and Anna learned firsthand that apparently bats hiss and scream - who knew? Now that is a pretty good friend who will catch a bat for you, I think. :)
Another thing that gets harder as you get closer to the end of pregnancy, in my opinion, is shopping. Since it's summer, I haven't had to do as much grocery shopping as usual (we just eat at camp most meals), but my friend Judy has been coming with me when I do have to go to town, and she is not only a big help with the kids but a huge blessing to me as well. This week, she stayed with the kids while my friend Sandy and I did some shopping in town. Sandy is an awesome blessing to me, too - not only helping me with my shopping, but also working to organize the kitchen staffers to help me with the kids when I need a break or help around the house, and just her constant attitude of thinking of everyone else instead of herself. She is an amazing woman, and I'm so thankful for her friendship and presence in my life!
Praise God for all of the people He's using to provide for our needs as we approach the end of this pregnancy and the beginning of a new stage for our family! :)
Posted by Carrie at 9:31 PM

Such nice friends! What a blessing! Lol with the bat, eek!