This week of Tot School, we studied the letter E. Actually, our Tot School was kind of haphazard this week, and I was very thankful for the planning I had done this summer, because....we are beginning the process of remodeling & moving into a new house! Our camp director is moving to a new house that the camp is building for his family, and we are moving into his old house! We have lots of painting, flooring, and other remodeling things that we're beginning to be busy doing at our new house, and so school is going to be taking a little bit of a backseat for a few weeks, I'm afraid! But we did do several activities that I had already planned, and I will go ahead and share them!

Here is our morning board for the week:

Zachary did very well with his verse and our song (Count Your Blessings) this week! He didn't get any new sight words, but did very well on reviewing the words already on the wall. He is also getting better at recognizing them in books, and when I get to a word we know, sometimes I'll stop and ask him what word it is, then he reads it & we go on. He likes that, but it can get tedious and he gets frustrated if I stop and do that too often - he has to be in the mood! :)

We used our oval shape viewer this week, which he really enjoyed. He said that his face was an oval (and mine, too, but no pictures of that)! :) 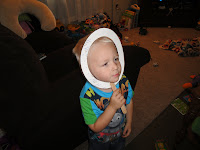 He was saying that the CD player was an oval: 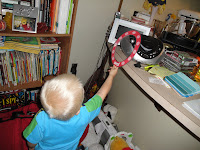 I got this picture too late, but that yellow word-maker toy by the bookshelf is actually oval shaped, and he found it & was pointing to it! 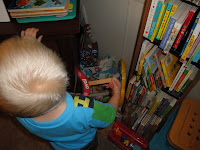 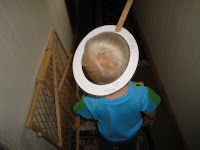 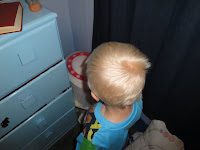 and the hole in his potty seat! We found a lot of ovals, and he loved this activity! :) 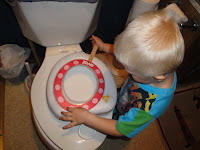 We dot-painted with our bingo markers on these magnet pages from Making Learning Fun - working on the #2 page! 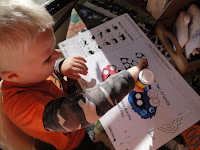 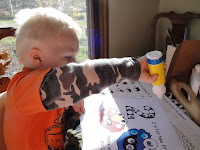 For our E collage, the original idea I had was elbow macaroni. But then I thought, he would just think those were noodles. So then I came up with the idea of painting with our elbows! So I told Z that we were going to do this, and he said, "Then my elbows will be dirty." I said, "Then we'll wipe them off!" but he still didn't want to - so funny! :) So we started out with an egg-shaped cookie cutter, some green paint (his choice), and a plate for the paint. And our E, of course. :) 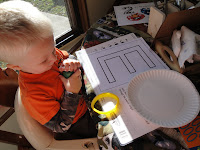 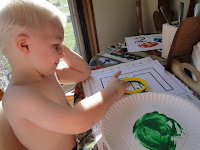 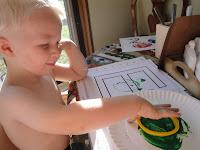 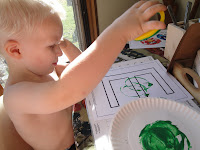 and then he decided that it would be ok to use his elbows after all! :) 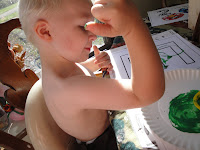 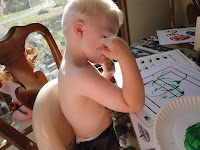 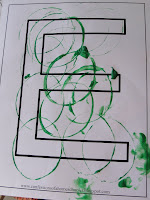 We used our playdough mats again this week: 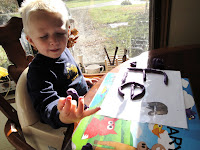 We also did this great craft: we made a gas pump out of a cereal box! Check out this post at No Time for Flashcards for directions! As we were getting ready to make this, I found the post online, showed it to Zachary, and said, "We can make this gas pump! Won't that be fun?" and he said that it would, but when it was time to make our craft, he said, "You can make the craft, and I will stand here and watch." So he did. :) He's enjoyed playing with it, though, until Natalie nearly ate one of the pieces of straw on the gas hose, so we had to put it up when she's awake! 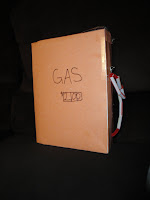 Natalie is getting so big! She is standing up holding onto everything - sometimes just standing there with one hand nonchalantly resting on the shelf! She likes to empty out the toybox & play with all the toys one at a time, then throw it down & move on to the next one. :) She was doing the same thing with our book basket this week... 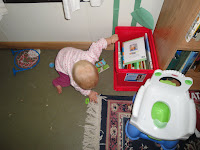 She has been so active lately, and is just quite a charmer! She likes to shake her head no if she is full or doesn't want you to change her or make her eat something, but also if she's heading down the hall, and I come up behind her and say, "Natalie Grace!", she looks up at me, gets this devilish huge grin on her face, and turns around, crawling away at full speed, shaking her head no - it's so naughty but also adorable and hilarious - I love it! :) She is such a joy, and is in such a fun stage, I just love this age - so busy but so much fun! :)

Carrie - what a fun little guy you have! He is really precious!

Praying for you and trusting God to show you exactly what He is asking you both to do now!

God bless you both!
Jill

Wow!! It seems like you had a great week... even amidst the craziness. Moving is always so time consuming! I pray it will be a smooth transition for you & your family!!
I love the painting with the elbows... so fun! Our little boy would have been hesitant at first too! And little Natalie is as sweet as ever- busy, but fun!
Hope this week went just as well!
Jessica