Well, the summer camp season is over. We definitely miss our friends, and Z is still a little confused about why we're not going to camp to eat our meals anymore. :) But it is nice to be home just as a family sometimes, too! I have been working on getting everything ready to hopefully start Tot School back up next week, so I'm sure I'll have more to post then. In the meantime, I'll share what I'm working on, and what learning we've been up to these last two weeks. :)

Zachary loves going to the Bistro (the camp snack shack) to get mozzarella sticks and ice cream, and to play the games down there - his favorite so far has been Connect Four. He doesn't 'get' the rules, but we like to fill up the whole board and then knock out all the checkers - pretty fun. :) 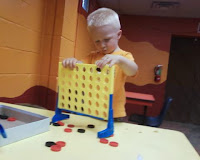 Here's Zachary at the camp pond, after consuming a ring pop in the Bistro: 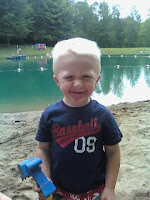 And here's just a cute one of his new hat and sunglasses from his Great-Grandma: 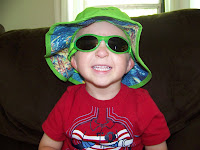 Zachary and I have been working on some basic personal care lessons, and he can now put his own shorts/pants on!!! We're working on the shirt, but he's having a hard time with it - he can't even take his own shirt off yet. We're going to be working on potty training soon (hoping to start tomorrow, actually), so I'm nervous (and a tiny bit excited) about that! It's hard to believe he's old enough to be ready!!!

I bought a couple of bingo daubers from the Dollar Store this week, to see what Z would think, and he really liked them! So we drew with those a couple of times, and he had a lot of fun - think I'll be going back for more! :) 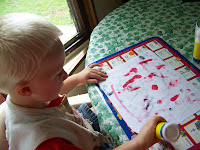 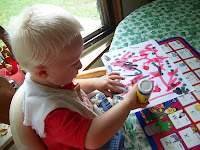 Hubby and I got away for a couple of days while his mom stayed with our kids, which was amazing - very relaxing and restful! While we were gone, the kids went out for ice cream with Grandma, and you can see which cone Zachary wanted... :) 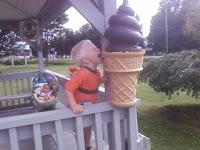 Zachary and Natalie have SO much fun together!!! They love to play together, now that Natalie's more responsive, and mobile, and she loves to watch Zachary, and laughs at everything that he does. Here they are playing with their ball popper toy - it shoots the balls out the top. :) Natalie is holding one of the balls, and she was loving watching them fly out and just playing with her brother! 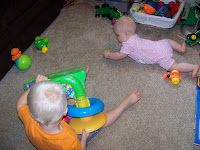 Speaking of Natalie, she is just growing like a weed - she's 8 months old now, and wants to be into everything! She can scoot-crawl forward now, which makes her much happier - she hated only being able to go backwards! :( Her favorite things to get into are books and Zachary's toys - he knows she shouldn't have books, so he'll say, "NO, Natalie! You can't have books!" It is so funny. :) She is eating her baby food pretty well, but she really loves Cheerios and graham crackers. :) She took her bottles really well for Grandma while we were on our getaway, so that was very exciting. (I was nervous because sometimes she doesn't do well with them!). She is just getting so big - I love to see her interact and all that she can do, but she really is growing up so fast!!! :( 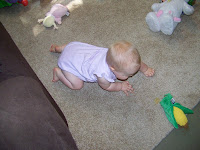 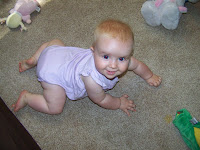 I have been planning and shopping for the new school year, so the rest of this post is about that - not too much on the planning front to share this week, I'm still working on our weekly Bible stories/passages that we'll study, and I'll share a link to those when I get them finished - 20 down, only 6 more to go! :) I'm also working on making our 'morning board' (it's actually sitting on the bed waiting to be glued together after I finish this post), so I'll share that next week, too.

One thing I have accomplished is some shopping! We stopped by the discount store called Ollie's again, and if you have one near you, you should really go! They always have LOTS of kids books on clearance! The two books I got this time were both by Roger Priddy, and I cannot say enough good things about Priddy Books - they are just full of colorful pictures, and simple words, and are just so great - I love them!!! The first book I picked up for just $3 was a first words Spanish-English dictionary. Z has loved looking at the pictures and hearing me say the Spanish words for them. :) I am hoping to use this to get him interested in simple Spanish, which he can hopefully study in his school years.

The second book I picked up (also only $3), was a wipe-off math book - NO, we're not ready for this one yet! But I adore wipe off books - such a great idea, rather than worksheets that have be thrown away - and this one introduces concepts all the way from the beginning (number tracing and simple addition) all the way through multiplication (adding sets is how the book explains it). We'll use this a lot, maybe next year. :) 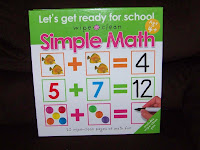 I also had a great time in the school supply aisle at our local Dollar Tree (where everything's a dollar!), and found some awesome supplies there! First up, this turtle stamp - they had all kinds of 'teacher' stamps that said "Way to go" etc. but Z really wanted a stamp for him, so we found him this turtle. 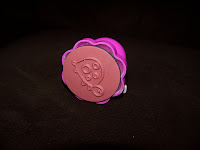 I really like the handle, and I think it will be easy for him to stamp with. We haven't used this one yet! :)

I picked up these two dot markers and a pack of 80 pom-poms. 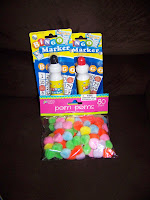 These alphabet clingers will look great on our windows: 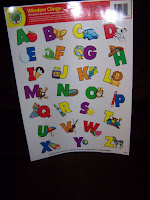 And I am saving this USA clinger set for another year, but I thought it was great - there are about 25 little symbols around the edge that you can stick on the state where they belong (like a potato, statue of liberty, etc.) 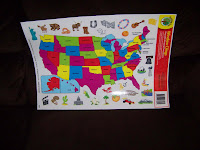 And this was from Walmart, but still, it was only $1 - a placement that you can trace the letters on! I have actually discovered that using a placement for Z helps me not have to wipe off the tablecloth quite as much! :) 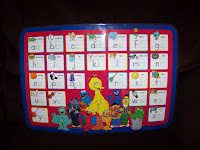 Looking forward to sharing more of my planning and more about our potty-training next week! To see what others are doing for Tot School, check out 1+1+1=1! :)
Posted by Carrie at 9:46 PM

How fun!! I'm sure it IS nice to be HOME sometimes! I'm so glad your little ones enjoy playing together so much- that is such a blessing. And what fun finds from the store! :)
Jessica

Hello, I came to your blog and have been reading along your posts. I decided I will leave my first comment. I have enjoyed reading your blog. Nice blog. I will keep visiting this blog very often…