We were able to do a lot for Tot School this week, and I actually took lots of pictures! We had a pretty rainy week, but the weekend was nice, so we took advantage of those days to spend time outside! Zachary loves to draw with his sidewalk chalk! 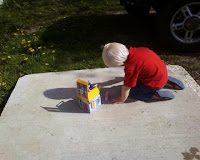 He also has been making words on the fridge. Here he made the number 10, and he said that the top word was 'Mommy', and he was working on making a 'Daddy' word. :) 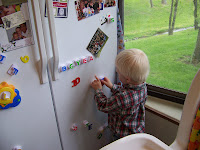 He got a coloring book from the phone company when Daddy had to go there on an errand, so we colored in that. He liked that it had trucks in it. 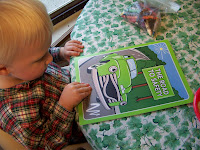 We practiced sweeping this week. I've wanted to try this for a while, but just hadn't gotten it together. I put a square of tape on the floor, and told him to use his little broom to sweep the crumbs into the square. He couldn't do much with it, but he tried, and had fun with it. 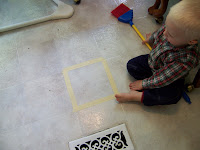 Here's all that we swept up, and he always loves to hold the dustpan for me! 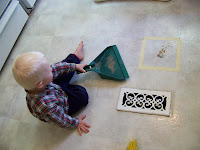 We did two crafts this week! First of all, we made a drum from a 'recycled' oatmeal container! 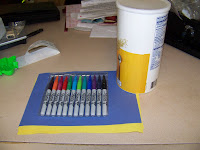 Zachary colored with markers on two pieces of construction paper that I had taped together and trimmed to fit the drum. 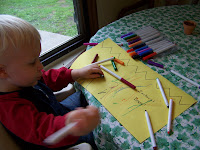 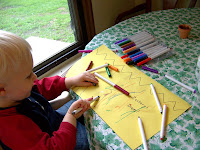 Here he is enjoying his drum! While he colored, I used my Sharpie markers to color a 'stained-glass' pattern on the inside of the clear-ish lid. Just for fun. :) It does look kind of cool, though my pattern could have been more imaginative. 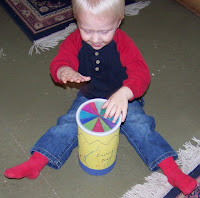 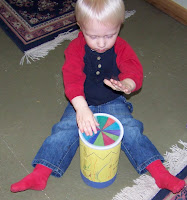 We also played with shaving cream this week. Here is how it started out: (peering at it) 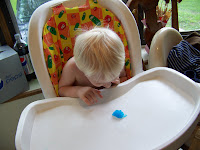 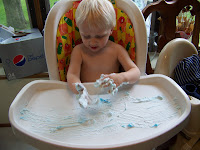 We had fun playing in it and writing letters in it. 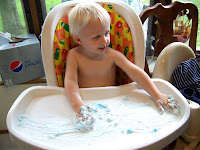 We put some in a bag to start out with, since it's supposed to be less messy that way, and wrote letters in that, but it didn't work as well as I'd hoped, it was hard to make the letters and get them to stay written in the bag. 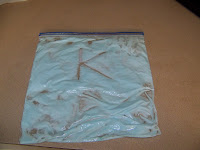 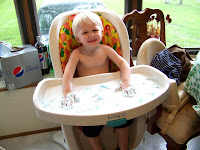 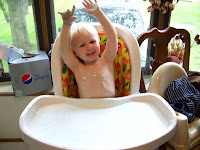 We also made a snake this week! Here is my snake, drawn on a piece of white cardstock, along with googly eyes, a red piece of paper to make a tongue out of, and some markers. 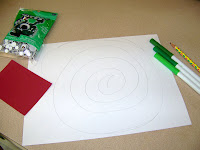 We started out coloring our snake with markers, and then we used some green paint - all I had in green was puffy fabric paint, but we smeared it around with brushes anyway - it turned out kind of cool - shiny and textured all over our snake! 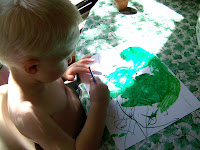 Then we glued his googly eyes on. :) And waited for him to dry. 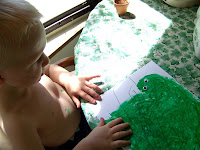 Here he is - I just cut around him in a spiral & cut his tail in a point in the middle. 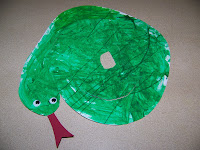 He spirals around like this - Z loves to play with him & leave him on my chair, so then I pretend to scream & be scared- "Oh, no, there's a snake on my chair!" :) 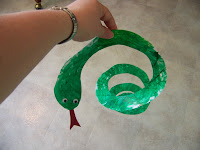 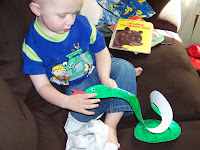 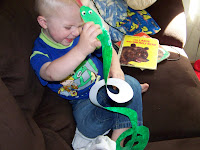 Z decided to plan and execute his own sensory experience this week by dumping coffee grounds (unused) on the floor and playing in it with a grilling brush and a few other kitchen utensils. I was sitting in the living room doing something, and I thought, "Hmmm..Z is quiet..." and then I realized "It kind of smells like coffee in here..." so, yeah - this is what I found. 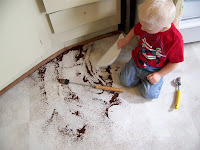 And he went #2 in the potty for the first time this week - yay! We read a long book (Danny and the Dinosaur) while he sat there & he was rather surprised when it happened. :) Afterwards, we tried to put his shorts back on, but he kept saying, "They too small, Mama, they too small". When I looked over, I realized we had put both legs in the same hole...too funny. Sorry for the blurry picture, I only had my cell phone on me. :) 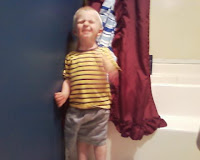 Zachary is soooooo sweet to Natalie - I love to hear him talk to her and comfort her! One morning I had to run over and take a picture because I heard him say, "Oh, Nallie, you lost your sock! Here you go, fweetie..." :) Notice the sock laying on her chest... :) Also, in the car this week, she was crying, and he reached over, took her hand and said, "It's okay, Nallie. I love you."
Then he went on to tell me that "Nallie is my family." :) So cute!!! 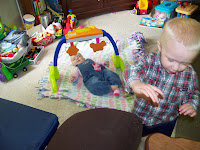 ...is getting bigger every day! She is eating cereal better this week, and I have found a rattle that she really enjoys holding - she will actually wave it around to hear it rattle. And of course she chews on it, too. :) She can't sit up yet, obviously, but she LOVES to practice, with me holding her hands. I can't believe she'll be 5 months old next week!!!

wow lots of great activities! I love the shaving foam one!!

I love how he's making his own "words" on the refrigerator. It's very cute, and hey, you have to start somewhere!

Isn't it so sweet to hear what big brothers say to their babies? Having two babies close together is crazy, but it's worth it for those sweet little moments!

Wow! What a great week! I may steal your drum idea if I can find a container that would work.

What a fun week! I am going to have to remember the snake craft, that looks like something Jimmy would love!

What a great mish mash! The snake is so cute! Wish i did more crafts with Jacob.

Magnetic fridge letters are sooo great to have!