We're back! :) After a 2-week break due to my parents visiting to help us work on our new house, which we're planning to move into sometime in December, and then a week at a camp conference at Skyview Ranch in Ohio, it was nice to get back into some kind of routine! Of course, we're still working on the house remodel, so that took a chunk of each day, but we did manage to fit in several school activities and some time outside to enjoy the beautiful fall weather!

Here is our morning board for the letter G:

This week's verse was really short, and Z learned it right away. He said he liked the song, but never wanted to sing it, so I wasn't really sure. Then later I heard him singing it to himself, so I guess he did pick it up. :)

We did our letter G collage this week - we started by tracing the G with a green marker (I told him to try to stay inside the lines with the green, and he did a great job). 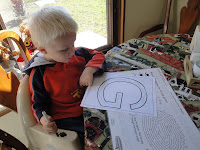 Then we colored some with gray, and he said, "I don't want to stay inside the lines", so I said that was okay. :) 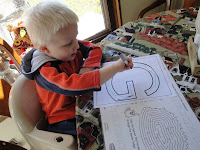 Then we used some glue... 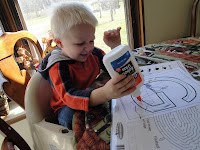 and stuck on some goldfish crackers, eating some along the way, of course! :) 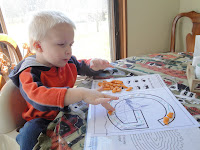 Here is the finished product: These are actually whales, because that's what I buy. Also, after a couple of days of the goldfish crackers being stuck on the page, they made the whole page orange & greasy! I kind of want to put all of our letter collages up on the school-room wall when we move to our new house, so I may re-do a different G instead of this now-greasy one...though I guess greasy also starts with G...! :) 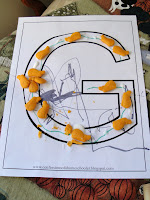 We dot-painted an Elmo page... 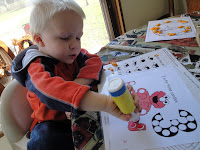 We used our G playdough mat for tracing with a wipe-off marker. 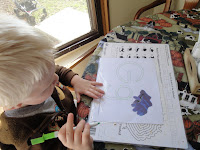 We made a garbage truck out of shapes: (click on the link for instructions) 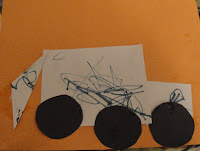 I didn't take a lot of pictures this week, but we also used our consonant cards, which are a favorite, and our clothespin cards, which Z also loves. He also played with his Aqua Doodle mat, and did some more wipe-off writing and coloring throughout the week.

As I mentioned, we played outside quite a bit - one morning he decided to bring Daddy's tape measure outside, and 'measure' the dirt! :) He had a LOT of fun with this, actually! 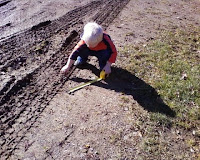 When we went on vacation, I bought this little Magna Doodle type toy for him to play with in the car, and he LOVED it! He and Daddy practiced drawing people, and the next day in the car, this is what he came up with! (It's me! I'm so proud!) :) 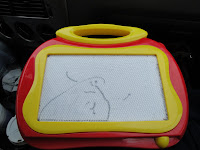 When my parents were here, I think Zachary read more books that week than we normally do in a month! My mom especially spent a lot of time reading books to Zachary! Here is my dad reading to both Zachary and Natalie: 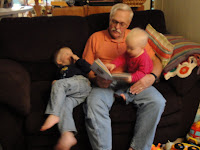 When we were at the camp conference, Z took his very first 'pony' ride - I think this was more of just a small horse, but he LOVED it! He can be easily intimidated by stuff like this, so I didn't know if he would ride the horse, but he did, and then he didn't want to get off! :) 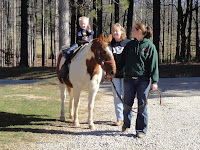 Miss Natalie is SO big! She is ten months old, has 11 teeth (working on #12, #13, AND #14 all at the same time!), stands up on everything and walks down the couch, crawls everywhere, gets into everything, smiles and giggles a lot, says 'da-da' constantly and 'ma-ma' if she is mad, growls adorable, waves, nods and shakes her head no, and tonight she said 'ba' while waving bye-bye to our friends at church! :) She is just growing up so fast!!!

Here is a picture of her with her two current favorite toys (she loves pushing buttons, and she loves music, so these toys combine these favorite activities) - her Elmo cell phone (actually a gift to Z for his first birthday), and an Elmo music player (also a gift for Z from this spring). She will push the button on the music player, and when it starts playing music, she looks up, her face lights up completely with a huge smile, and she starts dancing! :) 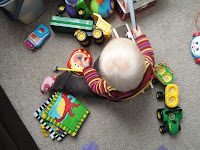 Here she is showing off her 'alfalfa' hairdo - a typical morning thing! :) 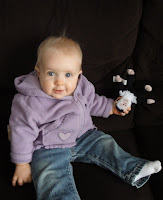 Other than reading books, Natalie and I didn't do any tot school stuff this week, but she's definitely catching onto things faster than her brother did - she already runs cars along the floor, and today she held a play phone up to her ear. A few minutes later she held a toy truck up to her ear, too, though, so who knows, really. :) But she's just so funny and cute, we adore her! ;) 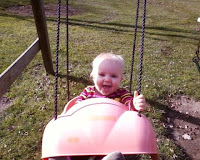 We learned all about the Garbage man a few months ago and my son love pretending to be one. Your cute shape garbage truck would have worked perfect for the unit...oh well, maybe next time.

I love the garbage truck. My son run to the door to watch it go by. We love our MagnaDoodle too.

I've been wondering how all has been at your house- I'm sure a bit crazy! :) I love that little tuft of hair sticking straight up! And what fun ideas you had once again!! Have a blessed week!
Jessica

So glad you guys are getting all ready to move in! Your kids' pictures are adorable as usual!